OC Book Blog: “A Ladder to the Sky” by John Boyne 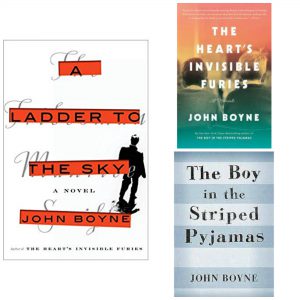 The Irish writer John Boyne is on a winning streak. Following the commercial success of The Boy in the Striped Pyjamas, he published a fan-favorite sleeper entitled The Heart’s Invisible Furies, a charmer, both what you might call smart, and poignant, page-turners. He captures the reader’s attention at once and holds you in his tender hands throughout.

Now another, except this a sharp parody of our celebrity and media-driven culture: A Ladder to the Sky.

He tells you right up front that this character, Maurice Swift, whose name is scribbled over the author’s name on the title page, is suspect. “You’ve heard the old proverb about ambition, haven’t you? That it’s like setting a ladder to the sky. It can lead to a long and painful fall. This is a tale about ambition.”

In parts alternated by key players – a writer whose life is destroyed, a brilliant writing-wife, a biographer, and Mr. Swift’ himself, we discover this talented wordsmith is a Machiavellian manipulator without a story of his own to tell, who nonetheless becomes a celebrated author. He also founds and serves as editor of a magazine cleverly named Stori. Over his lifetime, he manages to seduce men and women willing to pave his path and few, except the great writer Gore Vidal, in a fabulous section set in a fabulous villa, of course, are wise to his eccentricity much less his dark secrets. Boyne also does an excellent job capturing Vidals’ perspective when he comments on the public humiliation of a great writer after Swift reveals his darkest secret: “And as far as I can tell, half the world’s novelists have chimed in with their opinions, which has provided each one with their intended few minutes of publicity. How competitive everyone is in expressing their outrage! As far as I can tell, Bellow is the only one who’s said anything sensible on the subject.”

Secrets are Boyne’s literary concern – all his books are centered around what people hide, for the sake of salvation as well as opportunism. In a review of an earlier novel, The Absolutist, John Irving said, “Boyne is very, very good at portraying the destructive power of a painfully kept secret — not to mention the damage done by the self-recriminations (and other condemnations) that are released when that secret is revealed.”

Maurice Swift is more than ambitious, far more than determined or even unscrupulous. We slowly, with that pit in the stomach, recognize that he is a sociopath. Rare to discover this depth of amorality in a lead character that does not diminish the reading. I imagine my jaw was in permanent drop position through the last third of the novel. He is a fascination. A direct descendant of Raskolnikov of Crime and Punishment, one of my personal favorites, and a little like road-kill literature – you simply cannot turn your eyes away. Enjoy.