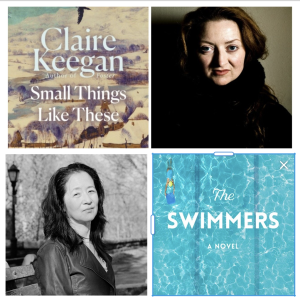 Book covers and their authors: “Small Things Like These” by Claire Keegan and “The Swimmers” by Julie Otsuka.

An examination of two novels: Small Things Like These, by Claire Keegan and The Swimmers, by Julie Otsuka

In Small Things Like These, Claire Keegan, a master storyteller, pens a 116-page novel of one man living a small life in a small town in Ireland where he grew up. It’s Christmas, circa 1985. Bill Furlong is a coal merchant making his rounds. He’s kind and generous and has a contented family, despite the many hardships facing the community.

How still it was up here but why was it not ever peaceful? The day had not yet dawned, and Furlong looked down at the dark shining river whose surface reflected equal parts of the lighted town. So many things had a way of looking finer, when they were not so close.

Startled one day by a runaway from the nearby convent, he’s forced to confront his own family legacy. The story, which has to do with nuns who pressed young pregnant girls into laundry service after their children were born, and taken away, is not new, and has been exposed in a number of readings and on film. And yet, in Keegan’s hands, the telling is fresh and just as powerful, and needs to be told again, and again, so such atrocities do not happen in the future.

When he let down the tail board and went to open the coal house door, the bolt was stiff with frost, and he had to ask himself if he had not turned into a man consigned to doorways, for did he not spend the best part of his life standing outside of one or another, waiting for them to be opened.

What makes this novel worth reading, beyond the beauty of the prose and the sensitivity of the protagonist/narrator, is the wonder Keegan brings to what might have been merely dour. In her view, family, children, tradition, and the simplest of life’s pleasures, are all that truly matters, whatever the unanswered questions we all face about the meaning of existence. Yes, it is small things like these.

Always it was the same, Furlong thought; always they carried mechanically on without pause, to the next job at hand. What would life be like, he wondered, if they were given time to think and reflect over things? Might their lives be different or much the same – or would they just lose the run of themselves?

Julie Otsuka’s third novel, The Swimmers, also modest (176 pages) is packed with fully realized lives and one, in particular. This story revolves around a group of swimmers at a city pool whose connections, especially among those who are otherwise unknown to each other, provide stability in an otherwise unstable world. When a crack suddenly appears at the bottom of the pool, swimmers are rattled, while engineers question whether the crack matters, or not, and whether it can be repaired.

We are heartened, however, by the results of the most recent study, which indicate that cracks such as ours – tentative, barely there, scarcely visible to the naked eye, in a word, shy – tend to be indolent rather than aggressive in nature and spread at a nearly glacial pace.

Otsuka, of Japanese descent, writes often about displacement, both on a personal level and global, and this novel, perhaps the more abstract of her writings, is nonetheless concerned with the same subject, and what happens when cracks – in systems, in geopolitics, in psyches – are dismissed or diminished in importance.

Most maddening of all, perhaps, is the mass psychogenic illness theory put forth by a small but vocal minority of  above ground nonswimmers [the crack deniers] who claim, without ever having once come down to the pool, that the crack is a purely “delusional” of “self-generated” phenomenon – a folie a deux – and if we’d all just pull ourselves together and stop thinking about it every second of the night and day, it would simply go away.

Cracks don’t repair on their own. Lives are inevitably and irrevocably altered. Meaning is lost. Much to think about in a slim work of fiction having to do with a small crack at the bottom of a pool. Prepare to be wowed.

“Did you ever have the nagging feeling you just wasted your entire life?”

Both novels available in hardcover or for your favorite e-reader, and via the Orange County Public Library. I recommend Otsuka’s previous novels: The Buddha in the Attic and When the Emperor Was Divine.

Catch up with Claire Keegan’s short story collection, Walk the Blue Field. Also the novella, Foster. In case you missed the film, Philomena (starring Judi Dench) it’s extremely well done: a gut-wrenching chronicle of a young mother and stolen child, based on the novel, The Lost Child of Philomena Lee, by Martin Sixsmith. Happy reading.