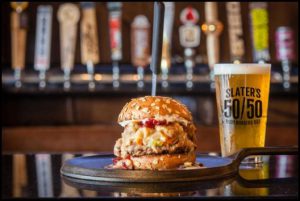 Now that the Thanksgiving leftovers have run out, if you’re still craving turkey and all the trimmings, Slater’s 50/50 restaurants are offering a new Thanksgiving Burger for an indulgent treat, available now through the end of December.

Starting with a juicy, well-seasoned turkey patty and generously topped with tasty layers of stuffing, rich gravy and tart cranberry sauce, this is truly Thanksgiving dinner on a bun (a locally baked honey wheat bun, to be exact), providing a full meal in each bite. The burger—perfect for fall and winter with notes of sage complementing the other decadent flavors—comes with your choice of fries and the restaurant’s famous bacon ketchup, sweet potato fries and pumpkin sauce or a house salad.

The limited-time burger is available at all Slater’s 50/50 locations, including Anaheim Hills (where the company opened its first restaurant) and Huntington Beach in Orange County. The restaurant’s name is based on the eatery’s signature burgers, which are made of 50 percent ground beef and 50 percent ground bacon.

There are plenty of tempting appetizers to pair with the beers, as well, like bacon mac and cheese balls that are crusted with panko bread crumbs, deep-fried and served with a Tapatio ranch sauce. And diners would be remiss to leave without ordering the signature Slater’s Vampire Dip, a creamy mix of roasted garlic, artichoke hearts and melted cheese, served in a bread bowl with veggies and crispy pita chips. But make sure to save room for the Thanksgiving Burger, which is plenty filling on its own. Of course, just like on the holiday itself, you can always save the leftovers.