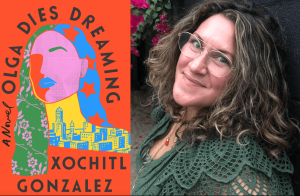 Now and then, a novel comes on the radar that should be more widely read than it might. Olga Dies Dreaming by Xochitl Gonzalez is one. A first novel written with the assurance and talent of a more seasoned writer and an homage to a people, and community, under-represented in fiction and in the media.

Olga is of Puerto Rican descent, living in Brooklyn in a neighborhood largely Latino. An area with a rich history and culture. She makes a living as a wedding planner to rich white folks, Manhattanites, and the author previously was in that profession, so she has wonderful insights into that world. What matters however in this novel is less the divide between the haves and have-nots, but what happens when power, family legacy and politics converge.

Olga enjoys the city nightlife and doesn’t much like commitment. Olga’s brother, Prieto, is the local congressman, living with many secrets. Her mother, Blanca, who abandoned the children when they were young, is fighting for Puerto Rican independence. Their destinies converge explosively in the advent and aftermath of Hurricane Maria, which devastated the island.

It was the golden hour when Olga found herself on what she imagined was one of the last underdeveloped corners of Williamsburg, navigating the broken concrete sidewalks in her heels. The sun’s last light so strong, it gilded the weeds that had popped up between the cracks. She passed an empty lot filled with old cars and as swing set, fenced in with chain link. The three-story brick-front apartment building that cradled its left side ws emblazoned with a spray-painted mural that paid homage, with improbable success, to the Puerto Rican flag, the coqui…

The novel follows in a long tradition of social realism: from Charles Dickens to Sinclair Lewis and Philip Roth and, more recently, Douglas Stuart. These are stories told in straight-forward language that reveal human struggle compounded by cultural and/or political pressure. Gonzalez is skilled at description – street scenes, sounds and scents are expressed with great detail, and affection, and I also enjoyed the smattering of idiomatic language and Spanish street talk. All the characters, some you will root for and some who will make scream, seem born of the sidewalks. Not flowery or over-wrought, but a great story about what might be real people dealing with real stuff.

Olga herself had never learned this linguistic mezcla that her brother had perfected, this ability to be all facets of herself at once. She always had to choose which Olga she would be in any given situation, in any given moment. Indeed, as she watched him work the room, she wondered why he had ever felt that he needed to have her there in the first place. Prieto’s “scene” was anywhere Prieto was.