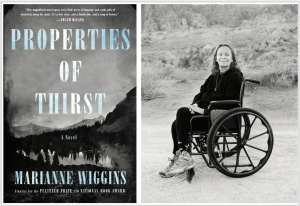 First things first: this novel is a masterpiece, second only to Marianne Wiggins’ previous masterpiece, Evidence of Things Unseen. If you missed that one, make sure to read. Unforgettable and important, and that’s how I also describe Properties of Thirst. Unforgettable, fascinating characters, important lessons of history, magnificent sense of place, and a powerful page-turning story—in the spirit of Stegner or Tolstoy! Historical and political, within the pleasure of great storytelling. In a word, wow.

… that what it meant to be American – what he’d thought it meant – was a portion of the whole, that what was out there was a spectacle beyond his keyhole view, that once you’re truly in it, even from an airplane, as far as you can see – everything is still too vast too large to obig to be a unified idea – nothing out there but unmitigated Nature, testifying to its nothingness, in the breadth and depth of its emptiness…

In essence: the fictional story (grounded in historical detail) of the establishment of Manzanar, the internment camp set-up for Japanese residents in northern California after Pearl Harbor. Told through the lens of the government agent sent to spearhead the project and the local ranching family with whom he becomes entwined, who also happen to be struggling with water rights (yes, way back then, water politics went hand in hand with fascism.)

Schiff had estimated there would be “ten thousand” but the mind resists that number: the mind transforms that number to a cipher with no face. Yet here they were, busloads of them, silent and confused, transported only with the things they carried in their arms and pasteboard luggage: their memories.

Along the way there is love, and loss, of course. The land as a sustaining force. Also, the sustaining and bonding nature of food – oh, the descriptions of food, unbelievable, better than any TV or video chef, because the rancher’s daughter is a gourmet chef, self-taught through her mother’s journals. Add the passions of a sophisticated east-coast aunt with an unconventional lifestyle, and the elders of the Japanese community coalescing to counter ghetto living, and spice with the occasional economic insights I for one never heard, for example:

…how Coke had ridden into Congress on its caffeine cargo and convinced the War Department Coke was good for soldiers, kept them up awake, alert, good for patriotism and the war effort, good for folks at home… No tax on the imported sugar, thanks to Washington, no tax ration for Coke delivery trucks…

As for the properties of thirst, they are elucidated at the start of each chapter, starting with the element of surprise, to memory, desire, truth, and spontaneous combustion, among others. A most original and exquisite defining structure. Again, WOW.

This extraordinary novel is a cauldron of joy and sorrow and enlightenment that make fiction  most powerful, particularly in the hands of the phenomenal researcher/writer, and visionary, Marianne Wiggins. Please note: the author suffered a stroke before the novel was completed, and was assisted by her daughter and Alta Journal Books Editor, David Ulin, to finalize, which makes the story all the more meaningful. I only hope it’s not Wiggins’ last.

Available in hardcover and for your favorite e-reader, and coming to the Orange County Public Library. Happy reading.