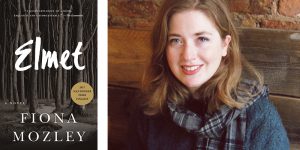 Now and then a debut novel knocks your socks off. Without fuss or complexity, told in humble descriptive prose, you are from the first in the clutch of narrative tension and you know you’re headed dark places. Elmet is such a novel, deservedly short-listed for the Booker last year.

I’m not familiar with Yorkshire legend, but I was able to picture the landscape — the loamy smells, the rustling of the wind — where families live largely off the grid. A culture of hard work and stoicism. Also an eye for an eye, and a take-what-you-can-get-when-you-can-get-it way of life.

And so it is for this family — an enigmatic father, a mighty independent daughter, and a delicate son, the narrator, who also speaks to us now and then from a distance of time and place so we know he survived, but we’re not sure who else might have. Their mother is long gone and although she occasionally makes an appearance in flashback, we learn little of her, and their father, a large looming figure, with nearly mythological strength, is their rock: a surprisingly gentle man sometimes called upon to earn a living as a fighter, also a sort of fixer (that’s where the noir comes in) and also a lumberman. A man who respects land and neighbors and tries to do what’s right, with a priority to protect his own, whatever that takes.

Like many country settings where families are known to feud, he is opposed by another powerful man and his sons. The story revolves around their struggle for control and the inevitably destruction that will be left in its wake. As well as the memories of a gentle boy caught in the grip of social rage.

I wondered if she thought about it too. Or if the boys did. Or if any of the other small people t the far reaches of my recollection spent the time that I had thinking about the bits in which they played a part. It seems to me that so much of everything came from this, and that if anyone thought about moments like this enough, the future would be done before it had even started, and I mean that in a good way.

Despite the Robin Hood setting and the dominance of malevolence, this is Cathy’s story – a slip of a girl mothered only briefly by a grandmother, determined to survive on her own terms. Cathy is no victim, and not one to play by the rules. She is her father’s daughter. And although [avoiding a spoiler here] there is a moment where the Christ figure enters, it is Cathy who may rise from the ashes.

In this novel, the climactic conclusion, a startling denouement, is secondary to the journey. The reader is voyeur. We make every move with them, and the characters surrounding them, and with each page we hold our breaths a little more until barely breathing. We don’t know what’s coming, but we know enough to fear it.

Elmet is an unforgettable little novel and I suspect we will read more from this lovely writer.

In paperback or on Kindle.