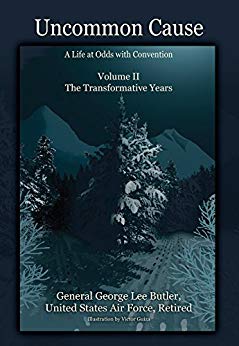 We all assume we know something of military life. We’ve seen lots of movies. Watched documentaries. Read a few books.  Some of us are close to members of the military. Nothing, however, will prepare you for the magnifying glass that 4-star General Butler holds in his memoir. No, you say, not my speed – I promise you, reading Uncommon Cause (With Illustrations by Victor Guiza) is worth your time and terribly important in this day and age of soundbites and tweets.

General Butler’s memoir portrays an incredibly expansive military life, but with an eye towards how that life affected family and community, as well as a nation. A one-of-a-kind glimpse into the inner workings of the military well beyond being the defender of the peace.

Turns out, General Butler is a Don Quixote. He doesn’t always choose his battles, he often charges ahead with sheer audacity, and supreme hope. In so doing, he creates change, even when risking his own life and career. A true American hero, which we could use more of.

Born to a military family in 1939 (auspiciously, the year Britain and France declared war on Germany) George Lee Butler graduated the Air Force Academy, where he subsequently taught and where parts of the memoir have been incorporated into the training manual. He also found time to earn a PhD in Political Science and was an Olmstead Scholar in France, where he earned a Master’s in International Affairs. A pilot who served in Viet Nam (a war he ultimately challenged) he has logged in over 3000 hours flying time in various places. He was designated Commander-in-Chief of the Strategic Air Command from 1991 – 1994. Earning this highest level military office, he had his finger on the nation’s nuclear arsenal and argued for the elimination of reliance on nuclear weapons.

By and large, the world wants to move away from the nuclear era. The question is how fast and how far. In a world of sovereign nation-states, I can’t rationalize any number above zero. If it’s more than zero, you have to acknowledge every nation has the right to have them.

General Butler’s adoration of his wife, Dorene (also a most impressive human being) is particularly touching and a tribute to all military spouses.

As you will come to understand, she was as much in service to her country as was I, making her mark in every assignment and on everyone privileged to be in her company.

Most impressively, this General is a fine writer. As lengthy as the reading is – two volumes, over 800 pages – it’s a page-turner. Almost impossible to imagine one life as rich and as deeply embedded in 20th century American history as this one.

Volume one deals with the formative years and Volume two with what he calls the transformative and I would call the maturity. From the naiveté and perseverance of a young man to the dedication to higher ideals of the older and decidedly wiser.

General Butler said he spent ten years writing the book, with numerous rewrites and readers. When I asked what, if any overriding message he wanted to send, he answered, “the unique risks to life and limb, the primacy of leadership and integrity, and the unrelenting sacrifices demanded of members, their spouses and most especially, their children.” And when I asked him to cite the most life-altering challenge or experience, he replied, “Always do and say the right thing, no matter the personal cost.”

Take the time to read this memoir. Enjoy each of the many fascinating episodes. When you reach the last page, you’ll be glad you know General George Lee Butler.

Available in hardcover (a fabulous gift) or for Kindle (and Kindle Unlimited for free.)