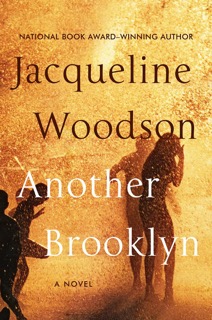 “Another Brooklyn” by Jacqueline Woodson 175 pp. Published by Amistad/HarperCollins, $22.99

Deservedly nominated for the National Book Award, this slim work of fiction, told in snippets of reminiscence, depicts the lives of four young black girlfriends in 1970s Brooklyn, which is a whole other place from the trendy borough today. I speak with first-hand experience as I was living in Manhattan at that time and rarely traveled to Brooklyn, or the Bronx for that matter, where I grew up, because these were dangerous places then. Think sex, drugs and rock & roll in the darkest of terms. [I refer you back to “City on Fire” by Garth Hallberg, reviewed here in February, and now available in paperback, which captures the city of that era extremely well.]

Woodson, best known for young adult fiction and poetry, expounds in this novel, with a delicate hand, the dangers, fears, and mysteries of emerging women. Each of these girls, although growing up in the same place, experiences that place somewhat differently, while they also find strength in togetherness.

The four of us together weren’t something they understood. They understood girls alone, folding their arms across their breasts, praying for invisibility.

Memory is the thread through the novel, as is the influence of the girls’ mothers – both pressing and missing. August, the narrator, believes her mother will return even as her father tells her otherwise. And we, the readers, suspect otherwise, but we also hope for her as we hope for them all. At the same time, the influence of their fathers is always just below their surfaces.

Perhaps the most heartfelt and difficult passages, as subtle and simple as they are, deal with the sexual violence perpetuated against one of the girls. So gently written one might miss the meaning, but it’s there, and it haunts not just the victim, but her friends, who gather razor blades to carry with them to protect her, and themselves.

But beneath the hopeful veneer, there was another Brooklyn, a dangerous place where grown men reached for innocent girls in dark hallways…

There is also a sense of invisibility of the race, despite their presence in various neighborhoods, even more so the culture of the race. Only when August goes out into the world, when she matures to young adulthood, does she claim the glory of her roots, and this is a very special moment in a novel of many moments both lovely and profound.

Roscoe Mitchell on saxophone, Lester Bowie on trumpet, the stumbling together of horns and drums and bells into music until so much beauty rose in the world breathing had to be remembered again, forced. How had Sylvia’s philosophy–spouting father missed this? How had my own father, so deep inside his grief, not known there were men who had lived this, who knew how to tell his story? How had the four of us, singing along to Rod Steward and Tavares and the Hues Corporation, not turned our radio just that much to the right or left and found Cecil Taylor, Ornette, Coleman, Miles Davis?

In the end, the novel is much about leaving Brooklyn, leaving memory behind in order to forge a future. It might be anyone’s story, and everyone’s. A beautiful piece of fiction, especially for women who remember fondly holding hands with their friends.

Available at Laguna Beach Books in hardcover and for e-readers. Highly recommended for book groups.

book club book review jacqueline woodson literacy is important Randy Kraft reads
Previous PostMiracles for Kids Night of Miracles Gala: “The Heart of a Hero” Next PostJourney of Transformation to "I AM Enough"