Miracles for Kids Night of Miracles Gala: “The Heart of a Hero”

A Night of Miracles brings together a multitude of heroes to help in its mission to improve the lives of critically-ill children and their families in need. 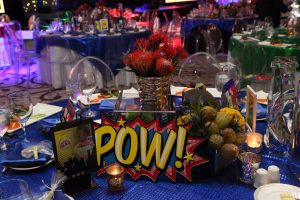 Emceed by ESPN Sportscenter Co-anchor Neil Everett (a longtime supporter and volunteer for Miracles for Kids), guests enjoyed a lively cocktail reception at the Five-Star, Four-Diamond resort with a premier silent auction. Immediately following, an elegant dinner program featured an incredible live auction with auctioneer Jim Nye, with some highlights including:

•Oceanfront Retreat to Villa Balboa, Puerto Vallarta for up to 12

•VIP Movie Premiere Package to Marvel’s Guardians of the Galaxy

The Night of Miracles also included an opportunity drawing for a black and white diamond ring and earrings from event sponsor Martin Katz valued at $29,500, savory cuisine, fine wines and spirits, and an intriguing performance from Eran Raven (The Mentalist, NBC’s Phenomenon).

During the Gala, Miracles for Kids friend and supporter, Grammy Award-winning singer/songwriter Skip Martin (former lead singer of Kool & The Gang) performed the debut of his original song, “Make a Miracle,” inspired by a Miracles For Kids client, and benefitting the organization.