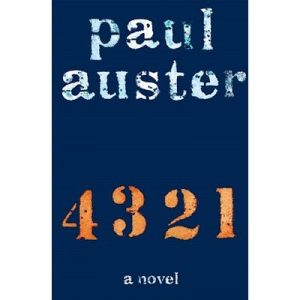 I have been reading Paul Auster for 30 years. He fascinates with his meditative, metaphysical view of humanity. He is also one of the great fiction craftsmen – never an extraneous word. Rich descriptive language. And some of the quirkiest characters and plot lines you will ever encounter. Some have called him the abstract expressionist of the written word.

In this masterpiece, and I don’t use the term loosely, Dickens meets Tolstoy meets Philip Roth. The intricate eccentric characterizations you find in Dickens, the grand scope of history and political intrigue in Tolstoy, and the neurotic loves and losses of the great Philip Roth, and all part of the universal Homeric journey. Seriously fascinating, I was riveted.

If you haven’t read Auster, start with Moon Palace or The Music of Chance. And I cherish my signed hardcover edition of New York Stories. His substantial collection – both fiction and memoir – tends to revolve around a set of themes. Coincidence versus destiny. The loss of a parent or important loved one. The inability to live up to expectations. And, the every present confluence of political history with personal trajectories.

In this magnificent novel – all 862 pages of it – we find all his themes expounded to the full and a cast of characters you will not soon forget.

“Ever since City of Glass, the first volume of his New York Trilogy, Auster has perfected a limpid, confessional style, then used it to set disoriented heroes in a seemingly familiar world gradually suffused with mounting uneasiness, vague menace and possible hallucination. His plots — drawing on elements from suspense stories, existential récit, and autobiography — keep readers turning the pages, but sometimes end by leaving them uncertain about what they’ve just been through.” Michael Dirda, in writing in the Washington Post.

Imagine this: One child born in 1947 [the same year Auster was born] but four lives lived, concurrently. Not a decision tree – the fork in the road approach – rather the unpredictable happenstance that alters destiny. To my mind, the ultimate examination of nature vs nurture. The life of this endearing boy, Archie Ferguson, whom we follow through his 21st year, plays out in different rent ways, despite common DNA and the same starting line.

Auster brilliantly makes it possible for the reader to follow along by posting chapters of each boy’s life during the same time period, and marketing them Chapters 1.1, 1.2, 1.3, 1.4, etc. And he also makes sure to drop reminders into the text so you know which version you are with. However, to be certain you follow along most effectively, I highly recommend you read chapters in their entirety. I picked up one in the middle and I had to go back to the beginning to be reminded which life I was in.

Auster is also often concerned with young men coming of age, trying to navigate the strange worlds of love and sex and an elusive sense of identity. I marked likely a hundred different passages to quote, but here’s just one that makes the point:

So there was Ferguson after Amy flew off to Madison, Wisconsin, a senior in high school with his whole life in front of him, as he was informed by his teachers, his relatives, and every adult he crossed paths with, but he had just lost the love of his life, and the word future had been erased from every dictionary in the world.

“4 3 2 1” publishes end-January: a perfect time for a great big brilliant novel to cozy up with on wintry nights.