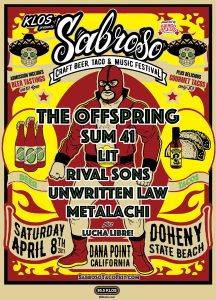 The event—presented by KLOS—kicks off on Saturday, April 8, at 1 p.m., and features live music, lucha libre style wrestling, games, contests, and complimentary craft beer tastings from some of the best breweries in the country, as well as $3 gourmet tacos from the region’s top chefs and restaurants.

Tickets for KLOS presents Sabroso Craft Beer, Taco & Music Festival go on sale Friday, February 3 at 10:00 a.m. and can be purchased at SabrosoTacoFest.com. A limited number of discounted Early Bird presale tickets will be available through KLOS on Thursday, February 2 from 10:00 a.m.  –  10:00 pm., exclusively for the station’s Workforce members. Visit 955klos.com for more details.

Parking at Sabroso Craft Beer, Taco & Music Festival will be extremely limited, so attendees are strongly encouraged to carpool and rideshare. Please go to SabrosoTacoFest.com for all shuttle locations, ride share lots, bike valet and suggested additional areas to park.

The festival producers encourage attendees to drink responsibly. This is a 21+ event: no one under the age of 21 will be admitted.