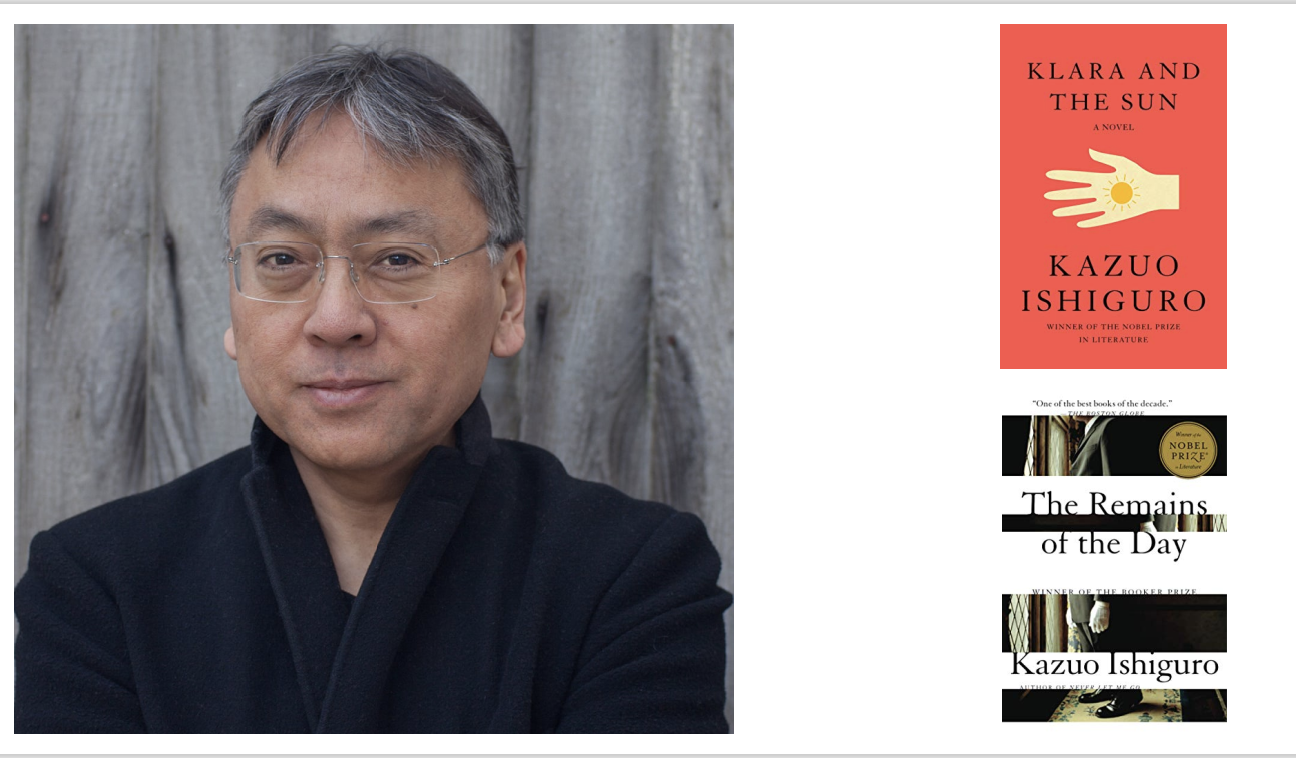 Kazuo Ishiguro, a Nobel and Pulitzer prize-winner, revered by fellow writers and readers, recently published a novel that seems, on the surface, different from the eight previous novels (as well as many short stories, screenplays and music lyrics) but which, carefully considered, isn’t terribly different after all. I was so moved by the novel, as I always am by this writer, and I thought it worth revisiting his most lauded fiction in pursuit of another great pairing.

In Remains of the Day, we are in the mind, and voice, of Stevens, a lifelong butler [and son of a butler] who has little contact with the world beyond the estate where he serves his master, and which he manages to perfection, until he is confronted by the formidable Ms. Kenton, a housekeeper with a will as fierce as compassion, and a desire to live a larger life. Ishiguro always writes in the first person and thus invites the reader deep into the thoughts and feelings of his protagonists, and never more so than in this novel. Late in his life, on a holiday in which he hopes to reconnect with Ms. Kenton, Stevens revisits his time at Darlington Hall, and, in rare moments of reflection, questions the insular world he has inhabited. In this, his story reflects on England before and after WWII – from dedication to ideals to misunderstandings and misplaced alliances. It is, as Pamela Paul, editor of the NYTimes Book Review, calls a perfect novel, and I agree. The writing, the seamless movement back and forth in time, the sensibilities of the characters, are masterful and fascinating.

Sidebar: The film version, starring Anthony Hopkins and Emma Thompson, is one of those rare feats of screenwriting that fully captures the novel, if you prefer the visual medium.

But what is the sense in forever speculating what might have happened had such and such a moment turned out differently? One could presumably drive oneself to distraction in this way. In any case, while it is all very well to talk of ‘turning points,’ one can surely only recognize such moments in retrospect. Naturally, when one looks back to such instances today, they may indeed take the appearance of being crucial, precious moments in one’s life, but of course, at the time, this was not the impression one had. Rather, it was as though one had available a never-ending number of days, months, years in which to sort out the vagaries of one’s relationship [with Miss Kenton;] an infinite number of further opportunities in which to remedy the effect of this or that misunderstanding. There was surely nothing to indicate at the time that such evidently small incidents would render whole dreams forever irredeemable.

From early 20th century to a time sometime in the near future, Ishiguro has written Klara and The Sun. Klara, in another first person narrative, is a character as limited by programming as Stevens, but an AI, what is called here an AF – Artificial Friend. There is a vague sense of the advances, and ethical struggle, and perhaps a dystopian setting, resulting from the manipulation of the genetic code, but at its heart, this novel is less science fiction than an exploration of how humans relate to and manipulate each other in a desire for perfection. [I also recommend Never Let me Go, which also questions how far we are willing to go to this end, and how do humans serve each other, for better and for worse? The sun, a powerful character itself, may be as much a master as the lord of the manor. Perhaps a manifestation of the spirituality we’ve left behind as we artificially recreate humanity? Do the disconnections between us prove more powerful than the connections?

…The answer is yes. I do miss England. In particular, I miss the hedges. In England, the part of it I’m from anyway, you can see green all around you, and always divided by hedges. Hedges, hedges everywhere. So ordered. Now look out there. It just goes on and on. I suppose there are fences somewhere in the midst of it all, but who can tell?

Klara and the Sun is available in hardcover or for your e-reader, while Remains of the Day, as e-book and in paperback. Both are available at the library. Happy reading.