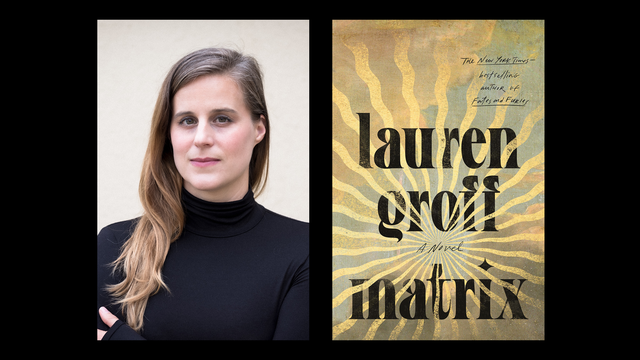 A contender for the National Book Award, Matrix, by Lauren Groff, is one powerful original glorious work of fiction.

You might suppose a novel about the life of a 12th century nun in England would be repetitive, or boring, or hyper-spiritual, but in the hands of the great Lauren Groff, this novel sings with earthiness and sexuality, determination and extraordinary personal achievement.

This particular nun, a tall gangly creature with an indomitable spirit, the distant relative of the Queen, despite the formidable challenges of landscape and weather, poverty and social struggle, glides beyond the trauma of family loss and exile to establish a quasi-Amazonian order and a unique sense of community.

For it is a deep and human truth that most souls upon the earth are not at ease unless they find themselves safe in the hands of a force far greater than themselves.

Marie has a heart the size of the sea, curiosity and intellect that make it possible to literally carve out new ways of living and harvesting the earth, and the perfect dose of mysticism to become one of the most memorable characters you will ever encounter.

But Marie had known well the nightingale … and she had often heard the wilder type of this breed of bird through her window during the long hot summer nights of her happy childhood as the river slid past the chateau with its hush.

Lauren Groff has been carving out her own niche in fiction since she began in 2008 with the fantastical Monsters of Templeton, on to the communal midwestern sixties in Arcadia, to a piercing look at marriage in Fates and Furies, and most recently a collection of stories having to do with the collision of human life, animal life and flora in, of all places, Florida. The one constant has been the beauty of the writing and the inventiveness of story, which is what the very best novelists do. In Matrix, she goes to another level on every level — the descriptive prose, the story, the characters, and the contemplation of the natural and spiritual worlds.

It strikes her now that god must be most like the sun in the sky, which rises for the day and sleeps at night, endlessly renewing itself; and it is warm for it pours out its warmth and light, and yet at the same time it is coldly remote for it continues on even as humans who equally fill the earth with life live and die, and it does not care either way, it does not alter its path, it does not listen to the noises on the earth beneath, it cannot stop to notice human life at all, it shakes off what absurd stories we try to pin to it and exists in calm as only itself, radiant and distant and meaningless.

I was reminded at times of Maggie O’Farrell’s Hamnet, my favorite novel of recent years. Although the 1600s, the poetry in the prose and the reflections on what ails us, and what heals us, is comparable. I would also suggest you check out an amazing novel published in 1998, by Sheri Holman, that takes place also in England, during the Cholera epidemic of the mid-1800s. The Dress Lodger is one of the most original and engrossing stories you will ever read, told by a narrator you will never forget, once you figure out who it is. Read either or both, if you haven’t, as excellent companions for Matrix.

Matrix is in hardcover and for your favorite e-readers. Happy reading.