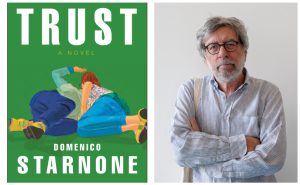 Who can we trust with our deepest secrets?

Domenico Starnone writes slim fictions, a rarity given the door stop-sized novels published recently.  One might call them novellas, as they generally have a small cast of characters and operate in a discrete timeframe and/or landscape. However, do not be fooled by the page count – this is a novel that nearly spans a life and digs deep into how people relate from one period of time to another as we age and, perhaps, evolve.

(Starnone, by the way, is rumored to be the husband of the mysterious Elena Ferrante, a hugely successful novelist, but that’s speculation, although, in his earlier novel Duets, the protagonist responds to my favorite Ferrante novel, Days of Abandonment, from the masculine perspective. Who else could get away with that?)

Also of significance is that his recent novels are translated by Pulitzer prize-winning writer Jhumpa Lahiri, an Indian American who moved to Italy some years ago to master Italian and now translates as well as writes in the language. A remarkable duo.

Trust, split into three parts, which might be labeled then, between and now, chronicles a relationship between a professor and his student: a lifelong love affair with professional undertones. Early in their relationship, one might say in the heat of the night, as a way of bonding beyond the sexual, they each confess a deep dark secret, something they would never wish to be revealed, and therein lies the heart of the title and the story: can you trust anyone with such a secret? And, in this case, how does the trust, or distrust, affect a person over time?

I’d always been a bit of a perfectionist, which was probably why I never liked myself. I wanted to be irreproachable, but given that in any situation there was always someone with good reason to reproach me, I grew up dissatisfied with who I was, and afraid of being blamed for something or other…. And so I was accustomed to a precarious balance between what I would have liked to be – to wit, irreproachable – and feeling resigned to my inadequacies…

He becomes renowned in his field [education] and she too becomes the student who in some ways betters the master. They stay close to each other even as they live separately lives, including his marriage, and when his end is near, when he is about to receive the highest accolades in the field, she returns to speak on his behalf. Because there is some ill will, he believes, and because they are now, in effect, competitors, will she give him away?

By now, I was too beyond reproach, in all of my guises, to place anxiety on myself, and onto my own thoughts, and so, now and then, I let myself indulge in harsh judgments, and malicious gossip… At the same time, I learned to cloud my vision…

In a paperback Europa edition less than 200 pages, you will follow them, root for them, fear for them, and wonder, page by page, who is to be trusted, or not. It’s a grand tale, unraveling like thread before the reader’s eyes. One of those novels you can binge with, better than Netflix, because the language is rich and real and the tension palpable, even in its simplicity. And the ending, perfect.