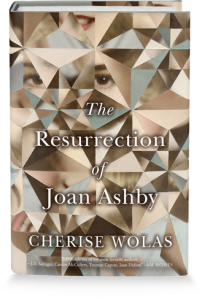 This is Cherise Wolas’ first novel, an accomplished debut by an accomplished woman – a lawyer, film producer and now, novelist in the footsteps of Ann Patchett, Barbara Kingsolver and Sue Miller. A beautifully crafted, literary page-turner about personal evolution.

It’s not exactly a new tale, rather a new twist, in fact a series of twists, told in a pitch perfect voice: a young woman achieves early fame as a writer and determines to devote her life to her craft. No children, no distractions. Seems simple enough.

I was not looking for love. Love was more than simply inconvenient; its consumptive nature always a threat to serious women … I wanted no such conversion, no vulnerability to needless distraction.

Of course, Joan falls in love. She believes she has found the partner who shares her goals and respects her resolve to live the writing life. Nevertheless, she finds herself a mother, betrayed by the husband she thought shared her dreams. He has dreams of his own, noble dreams.

Before she knows it, her writing life is shuttered. On hold, she convinces herself. She pours herself into the son who seems her mirror image – an avid sophisticated reader and writer. And then a second son: difficult, precocious, on an entirely different path she does not believe she can share. In secret, she writes. Decades pass before she completes what she believes will be the masterpiece her readers, and the critics, expect.

At this point, nearly half way through a 530-page novel, I began to wonder if the story would disintegrate into a seventies-style feminist manifesto. Instead, Wolas turns the novel into a nearly Shakespearean drama. Sort of A.S. Byatt meets Indira Ghandhi. A shocking turn of events sends Joan to an entirely new place and direction.

Oh, did I mention the stories within the story? Wolas has created a body of work for Joan, and others – stories, the first pages of novels, video blogs. Masterfully done.

She thinks it likely they may never see him again, that in order to move on he will need to forget he once had a hand in creating a world he didn’t want. She thinks destiny will always win out over second-best, that it’s an impossible burden on those left behind.

She lands in India, where, it seems, introspection always encounters truth. Again, there might have been a cliché in this, but Wolas handles the navigation so realistically, we go with her all the way. We cheer for her and feel for her and the story evolves organically.

Will Joan continue writing and fulfill her promise? The novel has much to do with destiny. Sort of mythologically considers how lives play out despite our best intentions. It’s a very good yarn, especially for those who have not had what Virginia Woolf famously called a room of our own. The creative personas within us subjugated by obligation.

Wolas has been compared to Carson McCullers and Truman Capote, even Joan Didion. High praise indeed. Let’s hope she stays the course in her writing. A powerful new voice here.

Published August 2017. Available in hardcover and for your favorite e-reader. Stay tuned to OC BookBlog – lots of great writers publishing this year.