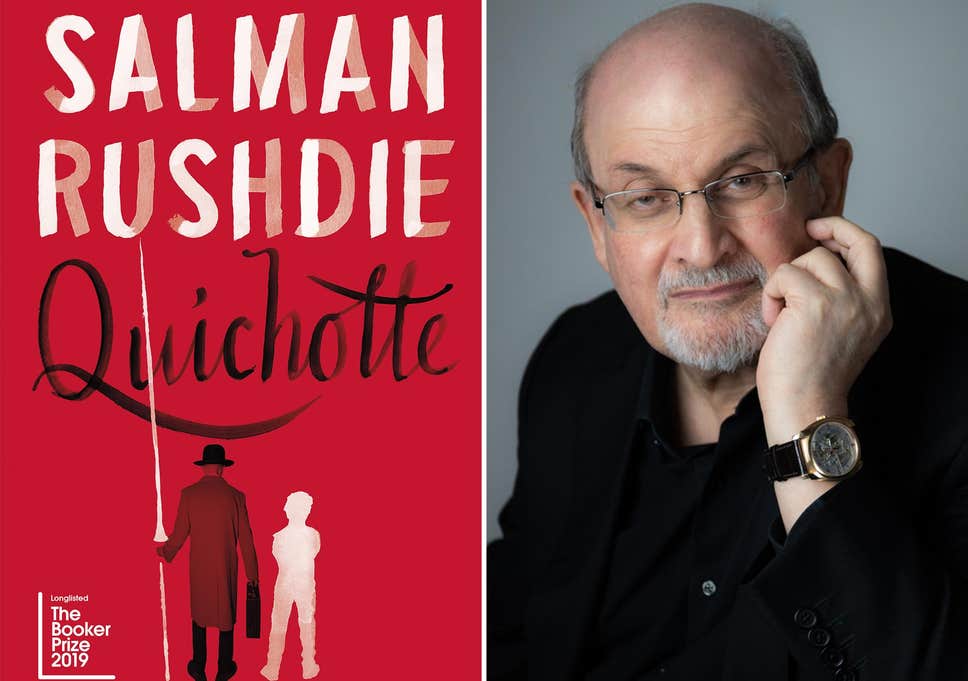 Not for everyone, for sure, Quichotte (pronounced key-shot) is, nonetheless, a great ride, for the masterful writing as well as keen insights into what ails the English speaking world.

The novel fluctuates between satire and magical realism, and within the blueprint of Cervantes’ Don Quixote, mixed up with Moby Dick, Pinocchio and a smattering of mythology.

Between the Gods and mortal men and women, there hung a veil, and its name was maya. The truth was the fabled world of the gods was the real one, while the supposedly actual world inhabited by human beings was an illusion, and maya, the veil of illusion, was the magic by which the gods persuaded men and women that their illusory world was real.

A writer’s cast of characters takes over the story on their journey to enlightenment. A lost soul-turned dreamer searches for his idealized beloved. A companion, in the form of an imagined child, comes to life. An opportunistic businessman tramples ethics. An adoring wife hopes to secure the family legacy with philanthropy (think Sacklers.) A Bollywood actress turned-talk show host struggles under the weight of celebrity (and fentanyl.) And, a high-profile advocate pedals integrity to the apathetic.

She was a privileged woman complaining about small things. A woman whose life was lived on the surface, who had chosen superficiality, had no right to complain about the absence of depth. Human life was lived between two chasms, a Russian writer had said, the one that preceded our birth, “the cradle rocks above an abyss,” and the one we were all “heading for, at some forty-five hundred heartbeats an hour].”

Brown (Indian mostly) confronting white (white supremacists mostly) and all in fear of the “other.” Sound familiar?

Yes, it’s a mixed-up story, often humorous, and maddening, and with an often confusing set of characters – multiple characters with multiple names on parallel, or intersecting paths. Rushdie is also sketching a tale of what-ifs and false narratives. And, for good measure, includes sexually damaged women and sexually mutable men. No stone unturned here.

Rushdie, no stranger to pointing the finger at evil-doers (once subject to a fatwa by Iranian religious leaders) seems to have decided to go after all the quirks of Western civilization, most notably capitalism and a pop-culture, aided and abetted by 24/7 TV. He also cites Zen and the Art of Motorcycle Maintenance and The Hitchhiker’s Guide to the Galaxy, books favored by wanderers.

It was bewildering at such an advanced age to understand that the narrative of your family which you had carried within you – within which, in a way, you had lived – was false, or, at the very least, that you had been ignorant of its most essential truth, which had been kept from you. Not to be told the whole truth, as Sister with her legal expertise would know perfectly well, was to be told a lie.

Frankly, I loved reading this novel. I looked forward to a block of time to immerse myself in his ingenuity – one must read for prolonged periods of time or get totally lost. I laughed. I cringed at painful truths. I marveled at his command of language and history. On the other hand, Rushdie once too often goes off the rails – rambling beyond a willing suspension of disbelief – and I agree with the critics who suggest he reign in pontification for the sake of storytelling.

Rushdie has created in this novel his own impossible dream, where fictional characters bring out the best in each other, battle windmills and redeem themselves of their sins, although along the way, they create messes everyone else has to live with.

Read at your own risk. If nothing else, Quichotte is exquisitely crafted and unforgettable.