Randy Kraft’s OC Book Blog | “Here We Are: My Friendship with Philip Roth” by Benjamin Taylor 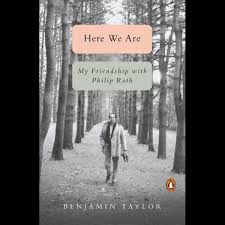 Available now in hardcover and for your favorite e-reader.

“There was no dramatic arc to our life together. It was not like a marriage, still less like a love affair. It was as plotless as a friendship ought to be. We spent thousands of hours in each other’s company. He was fully half my life. I cannot hope for another such friend.” ~ from Here We Are: My Friendship with Philip Roth by Benjamin Taylor

When it comes to the writer Philip Roth, there are two camps: those who dismiss him as a sex-obsessed east coast Jewish highbrow, and those who revere his prose and insights. I am a member of the latter. I admire his exceptional talent, also his profound understanding of the dark side of humanity and I appreciate his intention to reflect on political and sexual power, and the hypocrisy they breed, which is the common thread in his fiction.

He would have had the seat at the head of my fantasy dinner party table, based on what I’ve learned about him over the years, through tributes and his writings, and never more so having read this beautifully crafted memoir of late life friendship with writer/writing professor Benjamin Taylor.

Roth, who lived on the upper west side of Manhattan most of his life (as well as a country home in CT) was frequently recognized and Taylor recounts his resistance to that sort of notoriety: “At dinner one night in an Indian restaurant on Broadway, the actor Richard Thomas, spruce in a white beard, said to Philip, ‘You’re the writer whose meant the most to me.’ … Some variant of the encounter occurred when we went to any public place … ‘Let’s have dinner on the East Side,’ Philip would occasionally say. ‘Nobody knows me over there.’ Prompt refutation came in a favorite eatery on Third when a woman at the bar beckoned to me with a long forefinger. ‘Young man, is that Philip Roth you’re with?’ I nodded. She passed me her card. ‘Tell him I’ve got a classic six on Park and am available.’”

I missed my chance to chat with the great man not once but twice. Roughly twenty years ago, I too was in an uptown restaurant with friends when I saw him enter and walk toward a coat rack next to our table. Our eyes locked for a moment and I’m sure he feared I would intrude on his solitude. I resisted. On the way out, he looked up at me as I passed—he was eating a sliced veal dish and reading The New Yorker, exactly as I would have pictured—and I wanted so much to sit down and engage him in conversation, but I refrained. A friend I was with who didn’t recognize him asked me who he was, and when I told her she said, ‘My Lord, the way you looked at him, he might have been Paul McCartney.’ To me, he was.

A couple of years later, I was lucky enough to attend the National Book Awards with a good friend who invited me because Roth was receiving a lifetime achievement award. His speech was mesmerizing. On the way out (he was one of the first to leave and Taylor confirms a shyness among strangers) he was waiting for his car to pull up, and we ours, and again, our eyes met, and this time I smiled and said congratulations, and he nodded appreciably. I so wish I had known him and in this memoir, which is a charming and touching tribute, I feel I know him better.

For a man who has been called, like his contemporaries and friends Updike and Bellow, a misogynist, there were many women, friends and ex-lovers, at his bedside as he lay dying, and many more women singing his praises when he passed. (I recommend the New York Radio House podcast tribute.) He was an exacting and determined human being, not easy to live with, as he was the first to admit, and opinionated on a wide array of subjects. However he also had a great sense of humor, tended to pontificate in a Socratic way, and relied on music, as well as friendship, for sustenance, particularly during the many years he battled poor health and pain.

As the threat of death loomed over him with illness, he had a lot of time to ponder that imponderable. However he had no use for religion and no patience for platitude. Taylor tells this story about strolling with Philip and musing on religion after passing the Atheists booth at Columbus Center:

‘Why must the atheists’ booth look so sad?’ Philip asks. ‘Sant Patrick’s it aint.’ ‘The big money is behind the fairy tales. All those centuries of fairy tales. Wish away the fairy tales and you wish away all the art, music and poetry they’d be engendered.’ Whenever we’re walking and Philip has a thought, he’ll stop in his tracks. ‘Religions are the refuge of the weak-minded. I’d dispense with all the art, music and even poetry they’ve engendered if we could finally be free of them.’ “The B-minor Mass? The Sistine ceiling? George Herbert’s poems?’ A dog walker comes past with eight or 10 doggies of all sizes and shapes. “You see that?’ he says. Perfect concord among the breeds. The border collies admire the Heinz fifty-sevens. The Newfoundlands would make love to the dachshunds if they could. And why? Because dogs are wise enough to have no religion.’

Roth never won the Nobel Prize which still pains his fans, and apparently saddened him. However his body of work, numerous awards and many admirers, are high honors. And, he was a loving friend. This memoir may be more meaningful than the literary analysis and biography(s) still to come.