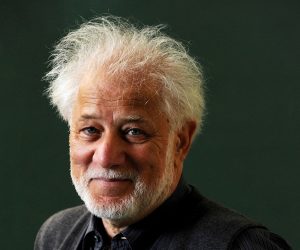 A modern master tells a melancholy tale of post-WWII Britain.

Everything we read about war is about the war – strategy, maneuvers, the drama and death. We too rarely read about, or watch on film, the immediate aftermath of war in a country, like England, ravaged for years. The slow return to past lives. The reparation – financial, personal, emotional. Or, an underground force still at war to tie up loose ends and ensure its end. It’s a fascinating time, brought to life by the great Ondaatje. Warlight is novel as intimate as memoir, and, to my mind, his best yet.

“When you attempt a memoir, I am told, you need to be in an orphan state. So what is missing in you and the things you have grown cautious and hesitant about, will come almost casually toward you. ‘A memoir is a lost inheritance,’ you realize, so that during this time, you must learn how and where to look. In the resulting self-portrait everything will rhyme, because everything has been reflected. If a gesture was flung away in the past, you now see it in the possession of another. So I believed something in my mother must rhyme in me. She in her small hall of mirrors and I in mine.”

In this, his eighth work of fiction, Ondaatje sets his sights on this transitional period, through the eyes of a young man employed by the government who finally uncovers his mother’s role in the war, and learns more about the people she placed he and his sister with to keep them safe.

However, as we know, and are reminded of late, children removed from their mothers are inexorably changed, in their view of the world and of themselves. This narrator, introduced as a school boy, evolves into an astute observer, a loner tethered to the past, while his sister becomes unforgiving and distrusting. Around them, a charismatic cast of endearing characters with their own secrets, who protect them and serve as surrogate family.

A lot happens, much is revealed, but slowly, quietly, in exquisite prose. Take your time. 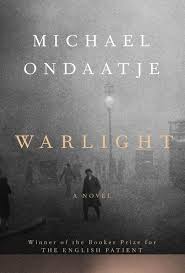 Warlight is rendered in images. No trappings of war, only suggestions of its existence on the periphery. Nathaniel tells the tale, and also manages to convince us so completely of his revelations over time, he is able to describe events in places he couldn’t have been.

He learns his mother was a notorious spy, integral to the war effort in western Europe. So valuable, that long after the war, the extremist opposition searches for her to exact vengeance. She is never as safe as her children, who have been left with seemingly unsavory neighbors and their eccentric circle of acquaintances. The mother called her children by pet names, so the children give their caretakers odd names like The Moth, another The Darter. There is a story embedded in every name, every move they make – love stories and stories of profound friendship, also disappointment.

“We order our live with barely held stories. As if we have been lost in a confusing landscape, gathering what was invisible and unspoken – Rachel, the Wren, and I, and Stitch, sewing it all together in order to survive, incomplete, ignored like the sea pea on those mined beaches during the war.”

Warlight (Knopf: 304 pp., $26.95)  is a stunning work of fiction, recently released in hardcover or for your favorite e-reader.