Sounds of Summer in Newport Beach

Across the country, summer is known as the season of music concerts and festivals. Hoards of music lovers brave the crowds, heat and soaring prices to see their favorite artists perform on outdoor stages under the open sky. Beyond offering participants the chance to sway, dance and sing to popular songs, music events can also serve as a platform to connect like-minded individuals who value the art of the melody—and a good performance.

Within Newport Beach’s creative borders, community meets art in the most entertaining way, with several summer concerts put on by private organizers and city leaders. From the Bank of the West Summer Concert Series at the Hyatt Regency Newport Beach to the city’s annual Concerts on the Green series, Newport offers a range of musical festivities that bring the community together this season.

“It’s an opportunity to come together with your family, friends, maybe your neighbors might come with you … or people you may not have seen for a while from the old neighborhood,” says Arlene Greer, chair of the Newport Beach City Arts Commission, which presents Concerts on the Green. “It provides a great sense of community, an opportunity to get together with people and sometimes meet people for the first time.”

Find myriad summer tunes-turned-community-gatherings at these concerts in and around Newport Beach.

Concerts on the Green
As part of the City Arts Commission’s directive to provide artistic and cultural enrichment for Newport Beach community members, the Concerts on the Green series was created in 2013 at the same time the new City Hall opened. The series has featured a wide range of artists and genres, from chamber musicians to The All-American Boys Chorus, and country music to rock ’n’ roll. This year, the series will present three rock ’n’ roll bands covering classic songs, including performances by Hollywood Stones, a Rolling Stones tribute band; Rumours, a Fleetwood Mac act; and The Springsteen Experience, set to cover renditions of the singular musician’s iconic hits. 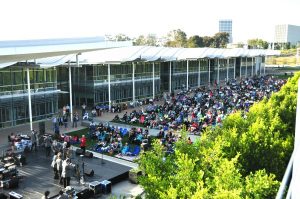 The free concerts, set for July 31, Aug. 21 and Sept. 11, run from 6-7:30 p.m. at the Newport Beach City Civic Center Green. Attendees can bring blankets, low beach chairs and picnic supplies to enjoy the show. Some even choose to watch the concert from the roof level of the parking structure across the street where they can tailgate and enjoy a view of the Green while their favorite tunes pipe through the air. Greer recommends arriving early to enjoy other aspects of the Civic Center.

“Directly behind the Green in our Civic Center Park is a fabulous sculpture garden exhibition,” Greer says. “There are [about] 20 works of art in the sculpture garden and you can take a tour up there—a walking tour—from one end to the other and see nationally known artists exhibited in the garden.”

Bank of the West Summer Concert Series at the Hyatt Regency Newport Beach
From June through October, the Back Bay Amphitheater at Hyatt Regency Newport Beach hosts a summer concert series that spans a range of musical acts from jazz ensembles to acoustic artists. The intimate venue offers an alfresco music experience and the hotel provides a host of other amenities, from rooms to restaurants, that allow for an all-inclusive music occasion.

Shor American Seafood Grill features a fine dining buffet while Bayside Restaurant sets up a shuttle service to the venue for patrons who dine with them before or after the show. 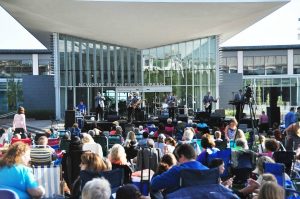 Though most of this year’s acts were not yet announced as of press time, past artists are an indication that only good things are to come at the Back Bay Amphitheater. Previous performers have included Kenny G, Boz Scaggs, Ruben Studdard and George Benson.

Toyota Summer Concert Series at the Pacific Amphitheatre
In conjunction with the annual OC Fair, many noteworthy performers will take the stage at the fairgrounds’ Pacific Amphitheatre from July 15 to Aug. 14. Located just a short jaunt from the Newport Beach county line, the OC Fair & Event Center’s outdoor theater can host up to 8,200 listeners for concerts that range from classic rock favorites to reggae acts. Three pre-fair shows—two from Iration and one from Three Dog Night with Pacific Symphony—and 1970s rock ensemble Styx kick off the series, followed by performances from Boston, Michael Franti & Spearhead, the B-52s and more.

Admission to a concert in the series also includes free admission to the fair and a ride on La Grande Wheel after the event.