Two by One: Two Recent Fictions by Mary Gordon 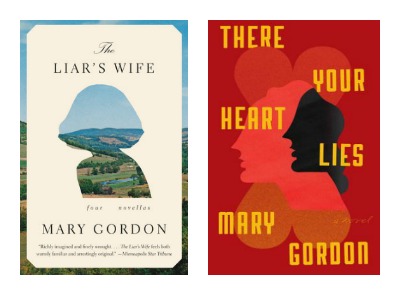 “The Liars Wife” is a collection of four novellas, and “There Your Heart Lies,” a novel, are the more recent of the sophisticated writings of Mary Gordon.

I should say five fictions, because The Liar’s Wife, published in 2014, is a collection of four novellas, and There Your Heart Lies, a novel, and together are the more recent of the sophisticated writings of Mary Gordon. She’s been at it since 1978 with a stunning debut novel entitled Final Payments and since then has devoted her sharp observations to the nature of human nature. One theme prevails through all her fictions: the ever-present defining influence of the people and places that form our backstories.

In The Liar’s Wife, Gordon presents four scenarios of people in transition. From an elderly woman confronted after many years with her errant first husband, an émigré of World War I held hostage to her crippled brother and her misguided memories of her mentor, Simone Weil, a young man chosen to introduce Thomas Mann at a school lecture only to discover later in life he was chosen not for his talent but because he represented the underclass, and the idealistic broken-hearted novice art historian discovering herself in, yes, Italy, Gordon beautifully captures all that ails us, and heals us, and the space between.

“Where had they learned it, all of them, this way of talking, this exaggeration, this leaping from branch to branch like frantic monkeys, not knowing if any branch would hold or, if it broke, what the damage might be?”

Novellas are the bridge between short stories and novels. Henry James’ favorite form, although he recognized their limitations. They are present and character-driven as a story, and usually constrained to time and place, but allow the writer the richness of descriptive prose and literary technique that makes reading a novel such a pleasure. It’s an especially good form if you would rather not commit to reading a longer book, and, in this case, the pleasure of four fully evolved stories to fulfill the fiction imperative.

I must share with you the words of Thomas Mann, which Gordon weaves so well into the spirit of the novella. “For the position of the spirit has changed upon the Earth in a peculiar way. Civilization is in retreat. A period of lawlessness and anarchy reigns over the outward life of the people. Yes, we know once more what is good and what is evil. Evil has been revealed to us in such crassness and meanness that our eyes have been opened to the dignity and the simple beauty of the good.”

Gordon also often blends in the consideration of religion and destiny, and has written extensively on Catholicism. She is both critic and adherent. In There The Heart Lies, she weaves the history of the church’s role in the Spanish Civil War and the subsequent hold of fascism. The protagonist, a schoolgirl when the novel opens and alternately a 92 year-old tending to her ethereal granddaughter, was one of the “Lincoln Brigade”– Americans who fought for freedom in Spain in the 30s. The novel starts a bit slow, and in familiar territory, with young Marion resisting her fervently religious family, and follows her through remarkable travels and the revelation of a period in which she too, like her brother before her, is tortured by the very people she expects to show loving kindness. In the process, her granddaughter, a girl whose primary goal in life is to make things prettier, learns something of the harsher realities of her family history.

“What is it about Amelia that makes Marian believe she can only be understood indirectly, using phrases that start with “like or “as”? Similes. Similitudes. The direct view is not the true one, only a series of connections to other things helps her to understand her granddaughter better, she likes to think, than anyone else. This understanding, she believes, must be the truest form of love.”

I am second to none in my admiration for Gordon [my favorites are Love of My Youth and Spending] but I confess she once too often got a bit pedantic in this novel, and peppered the history with one too many clichés of Spanish culture. However the novel is a good read and contains the lovely language and sharp commentary on humanity that makes Gordon so good.