Randy Kraft’s OC Book Blog: “Drive Your Plow Over the Bones of the Dead” by Olga Tokjarczuk 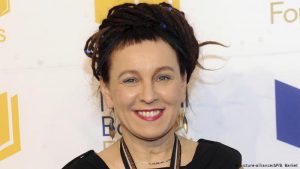 The Polish writer/activist Olga Tokarczuk, winner of the 2019 Nobel prize for literature’s novel is a remarkable work of fiction, as well as humorous, heart wrenching, also heartwarming, and politically astute.

The Polish writer/activist Olga Tokarczuk, winner of the 2019 Nobel prize for literature, has only recently been published in translation. Her metaphysical fiction, Flights, won the Booker prize last year and alternately charmed or confused readers. Not an easy book to read, but with fantastic insights into what unites us across man-made borders.

In Drive Your Plow Over the Bones of the Dead (the title, excerpted from a poem by William Blake) Tokarczuk takes us into the heart of a remote country village where the narrator, a late-life property manager/teacher/astrologer/animal rights activist, and all around eccentric, is mourning the loss of her “girls” whom we come to learn are her dogs. She contends they were struck down by hunters and, with a passel of unusual friends (all named for their personalities, no given surnames) she posits a series of unexplained deaths among members of a hunting club is the revenge of forest animals.

Because this writer is so skilled, and the protagonist wonderfully quirky, we accept her theory as a possibility. However the novel is less a mystery, although a mystery unravels, but more a portrait of the organic bond between all living things – humans, animals and plant life. Perhaps most crucially, all our lives disrupted or can be predicted based on where stars and planets are positioned in the sky. She makes the case so well, the most skeptical might agree.

Neptune in Libra – chaos. Uranus in Cancer – the people rebel, the decline of colonialism. Uranus was entering Leo when the French Revolution erupted, when the January Uprising occurred and when Lenin was born. Remember that Uranus in Leo always represents revolutionary power.

Fascinating is the word I would use to describe this remarkable work of fiction, as well as humorous, heart wrenching, also heartwarming, and politically astute. One-of-a-kind.

Tokarczuk quotes William Blake throughout and also frequently digs at Polish politics, citing Czech neighbors for more meaningful values [which caused quite a stir in her homeland.]

The border would appear in my mind, and that gentle, beautiful country beyond it. Over there, everything is lit up by the Sun, gilded with light. The fields breathe evenly at the foot of the Table Mountains, surely created purely for the purpose of looking pretty. The roads are straight, the streams clear. Moutlons and Fallow Deer graze in pens by the houses. Leverets frolic in the corn, and little bells are tied to the combines as a gentle way of scaring them off to a safe distance. The people aren’t in a hurry, and don’t compete against each other all the time. They don’t go chasing after pipe dreams. They’re happy with who they are and what they have.

Translated in 2018 by Antonia Lloyd-Jones. The last book review of the year and one of the best novels of the year. Much to look forward to in 2020 – the January blog will reveal.

Wishing you great books and good health in the new year. Cheers.