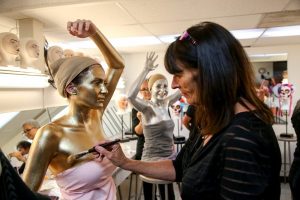 Readying for the Pageant. | Photo by Jody Tiongco

This year’s Festival of the Arts and Pageant of the Masters open on July 7 and run through Aug. 31 on the Festival of Arts grounds and the Irvine Bowl. Throughout the summer, there will be live music concerts and art workshops for adults and children, wine and chocolate tastings, and arts lecture series. The popular fashion show comprised of ensembles created from recycled materials hits the runway on Aug. 17.

Pageant of the Masters
Lewis and Clark, the Wright Brothers, Roy and Marie Ropp, Ginger Rogers and Fred Astaire, Don Quixote and Sancho Panza and, Adam and Eve.

These are some of the diverse sets of partners populating this year’s Pageant of the Masters titled “Partners,” a concept that its creator Diane Challis Davy has stretched to include painting and sculpture, inventions and exploration, science and legends of Hollywood and entertainment.

Davy got first ideas for “Partners” while assembling material for “The Big Picture,” a 2013 production which inspired her to include dance numbers by Gene Kelly, Fred Astaire, Ginger Rogers and Leslie Caron as suggested by movie posters. But, rather than using volunteers to dance, the Pageant hired professional dancers, explained Hill.

Another inspiration are the 1938 founders of the Pageant, Roy and Marie Ropp.

“Roy gets a lot of credit but Marie wore many hats as well,” said Davy.

Her research for the 2012 “The Genius” brought to light achievements by French scientists Marie-Anne and Antoine Lavoisier, dubbed “the father of modern chemistry.” Davy remarked that while he was executed during the French Revolution, she survived and preserved the records of their findings. “While ‘The Muse’ dealt with partnerships between artists and their models/muses, this is more about equal partnerships in a variety of fields,” she said.

The show begins with Adam and Eve in Jan Breughell the Younger and Peter Paul Rubens’ “The Garden of Eden.” There’s a partnership subplot here since the artist friends both worked on the painting around 1871. 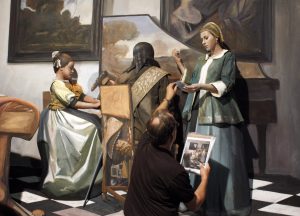 Cast members are carefully posed in their tableau before the reveal. | Photo courtesy FOAPOM.com

In a similar vein, there are painted depictions of art collectors/partners Gertrude Stein and Alice B. Toklas by Henry Matisse, and contemporary art patrons Fred and Marcia Weisman in David Hockney’s “American Collectors.”

Art couple Frida Kahlo and Diego Rivera are represented by Kahlo’s “On the Borderline” and Rivera’s “Detroit Industry” which has the distinction of being, at roughly 33 feet width, the largest backdrop ever done here, said backgrounds painter David Cooke.

A tour through the costume shop revealed that all are made from un-dyed material to the measurements of characters. Once sewn, artist Michelle Scrimpsher has to paint the costumes first while in three dimensions and then adjusting colors to resemble those of a two-dimensional painting. “It’s a challenge to coordinate the colors precisely with the originals and those painted by our set painters,” she said. Reagan Foy, promoted to costume director this year, recalls one of her first costumes nine years ago was for Diego Rivera’s “Dreams of Sunday.” “This year we are actually re-using it again, it survived well,” she said.

Carrie Morgan, a court-reporter by day, has volunteered in the make-up department for the last four years. An Aliso Viejo resident, she sees her fellow volunteers as a second family. “The greatest challenge is painting as many as 20 colors on the same character and meeting stage deadlines for each of them. Punctuality reigns supreme around here,” she said.

First time exhibitor Carla Bosch already made a name for herself in her native South Africa for bright colored, impressionistic landscape with a distinctly contemporary flair. She came to the US on an “Extraordinary Ability” green card which is only issued to applicants who have already proven notable success in their field. Now she has joined the multi-generational and cultural group of plein-air painters and has taken root in Irvine.

“I never paint from photographs, I don’t want to present mirror images of people and things but want convey my own impressions, the immediacy of what I see,” she said.

By contrast, ceramicist Mike Tauber is a veteran on the Laguna Beach art scene, at FoA as a ceramicist since 2008.

On preview night, he showed his latest work depicting “General Sherman,” a majestic Sequoia tree, a Cypress tree at Carmel and other nature scene rendered in fired ceramic tile. Holding up a piece in progress he said that the challenge of his medium lies in never seeing the finished colors until they are fired. “I get a lot my inspiration riding around on my mountain bike; Barbara’s Lake in the Canyon is a favorite,” he explained.

Multi-media artist Carolyn Machado will exhibit her signature assemblages and will teach two workshops, in July and August, on how to make a mosaic tile assemblages.

Also new on the scene is New Delhi born and educated printmaker Vinita Voogd. Her woodcuts printed on white paper show intricate motifs inspired by her travels through Asia, she said.