The Escape Bus Rolls Into the OC

The Escape Bus is a 30ft Bluebird passenger school bus that has been converted to a multi-room escape experience equipped with inventive tech and unique puzzles. | Photo courtesy The Escape Bus

I’m about to board what looks like an ordinary school bus, only it’s a maximum-security transport bound for the prison where I’ll be relegated to waste away the remainder of my days, serving a life-sentence for my involvement as part of an elite hacker consortium. The bus is completely automated though, there are no guards to be seen. So with my wits, together with those of my fellow convicts, we may hack our way out of here before we reach the penitentiary—we have to try.

Because that’s the objective of … The Escape Bus.

The Escape Bus is Orange County’s first mobile escape room, offering a unique form of entertainment in a 30-foot Bluebird former passenger school bus. The hacker-themed game, Firewall, immerses players in an interactive experience that weaves both mystery and brain-twisting puzzles, along with a willing suspension of disbelief, to create a compelling adventure for players.

Tyler Russell and Jonathan Katz—two enterprising and lifelong gamers and friends—have taken the escape room concept and put wheels on it.

“We’ve done escape rooms around the world,” says CEO and co-founder Russell. “And we wanted to bring the concept to Orange County, but we wanted to do something different and special.” Indeed it seems they have. 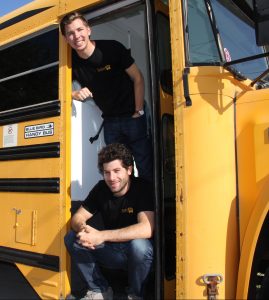 Two to six participants are locked in the bus for 45 minutes. While inside, they must work together to attempt to solve clues and find keys to help them escape. The bus doesn’t actually move during the game, however the urgency of your objective drives the thrill.

“Our aim was to create a game that’s fun but also challenging,” says gamemaster and co-founder Katz. “We wanted to make sure that it makes sense to people, that it’s accessible and that it can be solved.”

As it so happened on this day, my group solved the game with less than one minute to spare and it delivered all the suspense and excitement of a virtual jailbreak. But you’ll find no spoilers here! You’ll have to figure your way out of The Escape Bus on your own.

The Escape Bus can accommodate two to six players at a time, and is recommended for players 12 years of age and older. Tickets are $29 per person.

For more info and to purchase tickets visit http://www.theescapebus.com.