That’s What Friends Are For 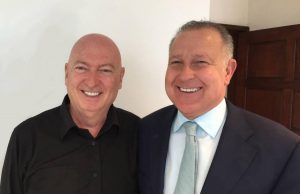 They can trace their friendship back more than 30 years when one was a busboy just off the boat from his homeland of Verona, Italy and the other, a South African expat just getting into the car business. Today, Sir Bruno Serato, known the world over for feeding 2,200 needy kids each day from the kitchen of his celebrated Anaheim White House, and Garth Blumenthal, general manager of the world’s number 1 Mercedes Benz dealership, will witness the true meaning of their friendship as they face the aftermath of a tragedy together.

Serato’s restaurant, where most of the food for the children is prepared each day, was decimated in a recent fire. When Blumenthal learned of the tragedy, he was among the first of Serato’s friends who pledged to help rebuild the historic structure. Though Serato held fire insurance, it isn’t nearly enough to rebuild it back to its former glory.

So, on Thursday, April 20 from 6 to 9 p.m., Blumenthal is inviting the public to attend a fundraiser at his Newport Beach dealership, Fletcher Jones Motorcars at 3300 Jamboree Rd, Newport Beach. Titled “That’s What Friends Are For,” the event will feature live entertainment, hors d’oeuvres prepared by White House Catering, complementary wine and live auction items such as dinner with Serato and Bill Handel of KFI Radio. Tickets are $100 each.

In addition, Blumenthal has pledged to donate $100 for every test drive starting on April 20 through the end of the month. Those participating in the test drive program are encouraged to mention that they support Serato.

“I was just a busboy at La Vie en Rose in Brea when I first met Garth. We were both expats just getting a feel for America and I think that’s what really sealed our friendship,” said Serato. “He was there every step of the way when I bought and renovated the restaurant and he continued to show his support by patronizing frequently. I am so grateful to Garth for holding this fundraiser … it means the world to me.”

Added Blumenthal, “Everyone who has ever met Bruno knows how special he is. When I learned about the devastating fire, my first thought was organizing an event where the entire community could come together and show their support. We believe that ‘That’s What Friends Are For’ will realize our hope of rebuilding Bruno’s dream.”

For more information and to RSVP, visit fjmercedes.com/thatswhatfriendsarefor