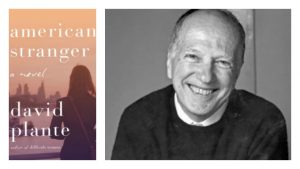 David Plante, an accomplished British-American writer, with a French-Canadian family tree, is not well known but prolific in both fiction and biography.

So much has been written in recent years about the search for cultural identity. We are all descendants of “others” whether in distant lands or more recent immigrants. And right now, the preponderance of refugees from Africa and the Middle East attests to the constant human migration and to our biblical propensity to be tribal. I’ve just read two slim compelling novels featuring female protagonists approaching the quandary of otherness on totally different paths.

David Plante, an accomplished British-American writer, with a French-Canadian family tree, is not well known but prolific in both fiction and biography. I heartily recommend The Family, his best-known work and a National Book Award finalist.

Now he presents American Stranger (published in January by HarperCollins) but this stranger is not new to our shores. Nancy grew up in an affluent Jewish household in Manhattan and knows little of her parents’ German history, other than they escaped during WWII. They never speak of it, she never asks, and this disconnect to parents is also central to the story. As she comes of age, aimless and superficial, she seeks herself as a reflection of relationships with three different men. (Think searching for love in all the wrong places.) The most elusive of the three is an equally troubled young man whose memory haunts who seeks himself in spirituality and nonconformity. Plante reminds us we are grounded not only in our roots, but in the worlds we create for ourselves. While there are a few plot moments I found implausible, it’s a beautifully written work of fiction with a unique set of characters.

“Anyway. Yvon knew he couldn’t blame Ma for what she was, because she couldn’t help herself, she didn’t have the will. You see, Ma was, well, a kind of innocent, it was beyond her all that made her helpless, and, I’ll tell you, I loved her for her helplessness. And, here’s something else I’ll tell you, I loved my brother Yvon for his helplessness, that made him, too, a kind of innocent. He tried and he tried, but, after all, Yvon didn’t have much will. And those are the innocent people.”

Pair this with Signs Preceding the End of the by Yuri Herrera, who some call Mexico’s greatest novelist. (I might argue on behalf of Carlos Fuentes, although I am so pleased to discover Herrera.) Published in 2009 and recently translated to English by Lisa Dillman, (Paperback from &OtherStories) this slim novel constructs the journey of a Makina, a Mexican girl in search of her brother who previously crossed over to America. A proud, feisty character, Makina makes the crossing under the auspices of a seemingly benign coyote, who uses her as a messenger. She carries one unknown messenger to a stranger, and a message from her parents for her brother. Once her first mission is accomplished, she finds herself in the labyrinth that is immigrant existence in border communities and her brother seems to have vanished without a trace. Undaunted, she sets out to deliver the message.

There are homegrown and they are Anglo and both things with rabid intensity: with restrained fervor they can be the meekest and at the same time the most querulous of citizens, albeit grumbling under their breath. Their gestures and tastes reveal both ancient memory and the wonderment of a new people. And then they speak. They speak an intermediary tongue that Makina instantly warms to because it’s like her: malleable, erasable, permeable; a hinge pivoting between two like but distant souls, and then two more, and then two more, never exactly the same ones; something that serves as a link.

And a comment reflecting America’s ever-changing profile. There are no others, we are one.

Don’t let it get you down. They don’t understand it either, they live in fear of the lights going out, as if every day wasn’t already made of lightning and blackouts. They need us. They want to live forever but still can’t see that for that to work they need to change color and number. But it’s already happening. 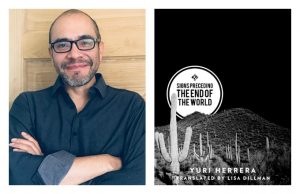