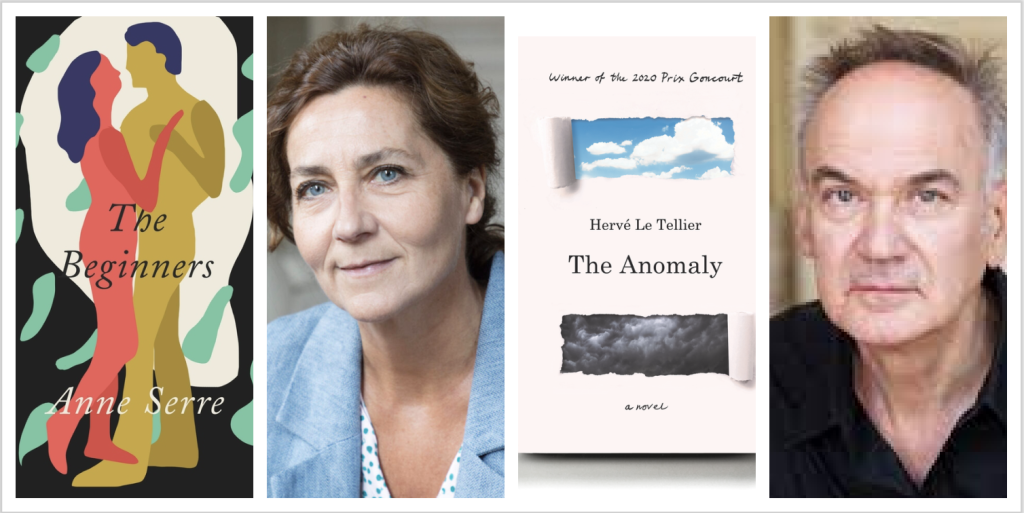 The Anomaly (winner of the Prix Congort, the highest award for French literature) is a novel about the pitfalls of polarity, capturing perfectly what ails us and, in the divide, may destroy us. A cautionary tale too late in human history for caution. Visionary, masterful and inventive, it is no surprise the book has received raves in Europe.

Aptly titled, this unique work of fiction (Le Tellier’s first English translation) explores a what-if premise to the extreme. A crossover mystery, sci-fi, existential exploration, it is confusing at first, but compulsively readable, and the pace, and tension, accelerate page after page. He drops clues here and there, so the confusion passes as the suspense heightens. We take a wild ride and suspend skepticism, because the story and characters seem eerily possible.

… a Cro-Magnon world devised by Neanderthals, the race of sapiens who, contrary to popular belief, were the ones who actually succeeded fifty thousand years ago? And now they want to see what those hyperaggressive African primates could have achieved if the poor things hadn’t been wiped out?

The novel begins with seemingly disparate profiles of several characters whose commonality becomes clear much further on, and, thankfully, we encounter them again as they make sense of the story. These characters, among others, are true doppelgängers. To avoid spoilers, I cannot say more.

Enter the experts in their fields – mathematics, quantum physics, technology – working with a maddening plethora of government and military types, all scrambling to make sense of what’s happened. The congregation of clerics in debate is a sadly hilarious screenshot of confusion.

I was reminded of the Pulitzer Prize winning The Bridge of San Luis Rey, by Thornton Wilder, published nearly a century ago [1927] which considered how disparate lives might have been lived under different circumstances. A good companion. Thornton focused on the search for love, while Anomaly more broadly delves into what sustains the human race. I was also reminded of the new film, Don’t Look Up, another cautionary tale relating to how the so-called first world behaves in the face of potential demise.

… I’d like to remind you of something Nietzsche said. ‘Truths are illusions which we have forgotten are illusions.’ Right now, the whole planet has been confronted with a new reality, and it’s challenging all our illusions.

Speaking of truthful illusions, The Beginners, an odd stream of conscious novel by Anne Serre, Is absolutely captivating. Well-reviewed by a sleeper this season. Shades of Elena Ferrante’s early work.

Anna, a middle-aged woman, happily married for twenty years, or so it seems, suddenly finds herself drawn to a man she’s seen but doesn’t know. Is it possible, she wonders, to love two men simultaneously, and as she draws the stranger into her orbit, she wrestles with the meaning of attachment.

Are we so familiar with grief and death, then, that we can draw a line that swiftly through all we have experienced? Or is it just Anna Lore, with her aversion to remembering, who, having twice lost someone she loved, has learned not to wait around or love back?

What makes the novel especially fun to read, beyond the premise and the propulsive narrative, is that their attraction is not classic sexual chemistry, neither a meeting of the minds or a matter of convenience, oh no. Anna wills this to happen. Why? Is she drawn to this man, so different from her, or her husband, or running from a loving husband who no longer satisfies? z

You can’t simply abandon someone who is everything to you, or you are to her. At a pinch you can ignore her, withdraw for a time, into your anger and dignity, and leave her to her little extravaganza.

The novel may be ambivalence defined, on all sides. Confusing and contradictory. And the end, less closure than food for thought. Sometimes there is no clear way in or out. I recommend as companion reading Ferrante’s Days of Abandonment, and the subsequent Duets by Domenico Starnone. Unlike the many tomes published of late, all three are a quick read and memorable. Enjoy.