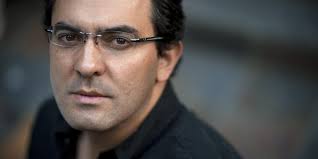 I have a writer’s crush on Juan Gabriel Vasquez. This younger generation of great Colombian writers is the anti-magical realist. He’s all about realism. His powerful novels implicate dirty politicians and angry zealots and in Reputations he tackles the impact of media on the politics and perversions of the culture and the individual.

I would add that I have no idea what it takes to make a great translation. I only know there is a difference between them. For example, all the great Russian novels currently being re-translated by the Pavear/Volokhonsky duo, seem to bring those stories to a higher intensity. The same original words, but somehow more dramatic, more accessible to the reader. So it is no mean feat to read a novel written in Spanish, translated by Anne McLean, that feels as if we are reading the language where it is set and miraculously understanding every word.

Javier Mallarino, the protagonist, is the country’s most influential political cartoonist. He defers to no one and has caricatured just about everyone of importance. His cartoons have influenced legal decisions and destroyed careers. Those in power revere him and the story revolves around a moment when he is honored for his lifetime’s work.

“What most bothered people who were caricatured, Mallarino had discovered over the years, was not seeing themselves with their defects but having everyone else see them: as when a secret comes to lights; as if their bones were a well-guarded secret…”

At that event, he is approached by a young woman, whom seems a stranger, and who infiltrates his life in pursuit of understanding her own history, which is revealed to be intertwined with the master cartoonist.

I especially appreciate the sensitivity with which JGV writes women.

“There are women who do not preserve, on the map of their face, any trace of the little girl they once were, perhaps because they’ve made great efforts to leave childhood behind – its humiliations, its subtle persecutions, the experience of constant disappointment – perhaps because something’s happened in the meantime, one of those private cataclysms that don’t mold a person but rather raze them, like a building, and force them to reconstruct themselves from scratch.”

JGV, through simple elegant prose and a straightforward seeming story, invites the reader to consider how our lives intersect and change in a moment even those we never notice or considered of consequence, until it is. And what does influence really mean for any one individual?

“Life turns us into caricatures of ourselves.”

If you haven’t yet experienced Juan Gabriel Vasquez, start with the new one, but make sure to go back to The Informers and my favorite,

The Sound of Things Falling, which take a hard unflinchingly honest look at the Colombian culture.

Reputations is available in hardcover September 20 at Laguna Beach Books and for your favorite e-reader.