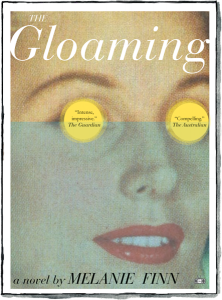 This fiction follows one lost soul through a minefield of others.

What a treat to discover a compelling and unusual novel published by a small press. There are many great writers like Melanie Finn but too few get the attention they deserve or find their audience. Two Dollar Radio, with the tagline Books too loud to Ignore, published The Gloaming, a small mystery with a big heart and an intimate glimpse of both insiders and outsiders from Switzerland to Africa.

The protagonist, by the name of Pilgrim Jones, innocuous enough, you would think, has been abandoned by her husband for another woman while traveling in Switzerland. Reeling from the punch, she tries to understand how she had been so mistaken that their marriage worked, until she discovers her husband wants a family with the more amenable woman. To add insult to injury, Pilgrim is subsequently involved in the death of three children, but she has no recollection of the accident nor does she fully comprehend the consequences. How can she? She is in the grip of despondency and confusion.

In that despair, everything seems more oppressive, more furtive and mysterious, and in this, Finn is especially good at evoking the scene. She writes frequently about the play of light and dark, and the similarly conflicting lack of communication, slowly establishing a powerful sense of place as well as the flaws, and flightiness, of humans outside their comfort zones.

Sitting on my bed, the window framing a rectangle of light, I watch thunderclouds. Muscular and grand. Their shadows cast across miles, shifting the dominant tone of the landscape from green to deep purple. Almost every afternoon the clouds perform. But despite their baritone rumbles, there is no rain, only the damp and oppressive weight of expectation.

And then there is the curse of the witch doctor … but no spoilers here.

Pilgrim takes off impulsively, and remains, in a small town in Tanzania, where she becomes embroiled in all sorts of personal mysteries. This is a novel about a journey towards redemption that involves several odd, equally down and out characters struggling to survive in an entirely different culture.

When you understand this country, you know you cannot ever understand it, says a physician who befriends her.

As Pilgrim takes halting steps towards a new future, she goes missing, and the people in her midst take up the story. With subtle but steadily increasing tension, the narrative shifts time and place and voice, but the story remains cohesive, if you read carefully, and make sure to read every word, as this Kenyan-born American writer is one to watch [this is only her second novel]. Even when she slips into the abstract, or especially then, her descriptive language is a delight for the literary reader.

Detail established truth. The color of the dog. Without detail, truth was a metaphysically unstable idea: too general, too bit; cause and effect going all the way back to first dates, to ancestors surviving winter storms, to dinosaurs, to organisms in a puddle.

Available as a trade paperback original or for e-readers.

Previous PostRandy Kraft's OC Book Blog: "Little Nothing" by Marisa Silver Next PostHome Away From Home for the Holidays: Enter to Win It