You might have seen the much-lauded film “Call Me By Your Name” — a dreamy, elegant portrait of a young gay man coming to terms with his sexuality. John Boyne, the author of the acclaimed Boys in the Striped Pajamas among many others, has penned another sort of coming of sexual age story in which a young Irishman discovers who he is in a world where homosexuality is not only considered deviant, it’s a mortal sin.

He’s literally told, as a very young man, by voices of authority, there are no homosexuals in Ireland.

“It was 1959, after all. I knew almost nothing of homosexuality, except for the fact that to act on such urges was a criminal act in Ireland that could result in a jail sentence, unless of course you were a priest, in which case it was a perk of the job.”

The writing is crisp and sharply observed, and a page-turning pace, and Boyne skillfully evades the Irish heritage of surrealism and hyperbole. Imagine John Irving meets Dickens, brimming with orphans, thieves and curmudgeons, great big houses and tiny houses and grandfather clocks. And, of course, the pursuit of true love. 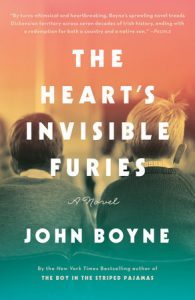 Yes, in case you were wondering, the story begins in 1945 when the narrator/protagonist’s 16 year-old, unwed pregnant mother is exiled from town by, yes, the priest, from the pulpit, when she refuses to name the father of her child. [We learn much later why.] The boy she gives up for adoption tells the tale but she lingers thorough the novel on the periphery, a charming character, as if to say he is not nearly as alone as he feels.

His adoptive parents – an eccentric writer and womanizing father – regularly remind him he is not really their son. No wonder his evolution is a struggle well beyond the challenge of sexuality and the nearly vicious constraints of the church.

From Dublin to New York and Amsterdam, he follows his destiny, but suffers exceptional losses and indignities, not the least of which are when he is least true to himself.

“Had I been able to see forever, I could have looked out to the other side of Dublin itself, through Kildare and Tipperary and onwards to Cork City, then into the toe of the country at Goleen itself where, although I did not know it at the time, my grandparents were being buried side by side that same afternoon, having been run over by a speeding car as they left the funeral Mass of Father James Monroe, the man who had banished my mother from the town some twenty-eight years earlier.”

Over the course of eighty years, we travel with him, route for him, fear for him, cry for him, and, more often than you would imagine, we laugh with him. Boyne brings great humor to this charming life-story and even though he went too far, for my taste – tying up every single loose end a bit too tightly – the overall reading is completely wonderful. A true curl-up-on-the-couch read or sit-by-a-beach read or bury-yourself-on-a-long-plane-ride read. Enjoy.

Published August 2017. Available in hardcover and for your favorite e-reader. Stay tuned to OC Book Blog – lots of great writers publishing this year.