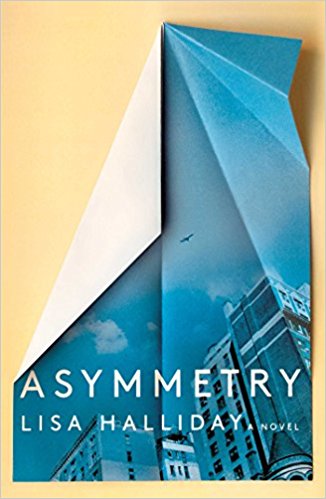 “Asymmetry” by Lisa Halliday is published by Simon & Schuster.

A unique first novel by another mid-life accomplished writer (like Cherise Wolas’ recently reviewed debut The Resurrection of Joan Ashby.) Halliday spent years as a junior literary agent and in her twenties had an affair with the great one, Philip Roth, forty years her senior. (Apparently they have remained friends and he has commented favorably on the novel.)

In the first part of a three-part work of fiction, characterized largely by its various asymmetries, she tells the tale of a similarly junior editor having an affair with a similarly revered older east coast writer, and if read much of Roth, his books or essays, this is decidedly auto-biographical. Part one takes place in Manhattan and Long Island at the onset of the first Iraq war, with the anxiety of the twin towers hovering over the city.

It was cool for June; a steam rose from the water as though a river of magma flowed only a fathom below. Rustling trees cast trembling shadows on the basin, whose layers had chipped away over the years to leave swirls of old grays, greens, and aquamarines, like an antique sea chart. Beneath the surface, Alice’s hands, still coming together and swiveling apart, began to look less like instruments of propulsion than like confused magnets, or hands trying to find their way out of a dark room. But still, she swam.

The unlikely affair between the older brilliant Jewish writer, who lives on the west side (and also Long Island) and the young quirky Irish woman, from the east side, Asymmetrical is surprisingly and delightfully funny in parts. And insightful.

The affair plays out predictably, and in Part three, the novel returns to the writer in later years in a stunning fictional interview in which he is asked to define the decades of his life through music. Roth fans know he is nearly as devoted to classical music as his writing, and the interview seems spot on. One of the characters in Part two is an exceptional pianist, one of the few slim threads of connection between parts. Asymmetry, not disconnection.

Our mother’s tendency to mythologize our childhoods would have you believe that Sami, who had never touched a musical instrument before, sat down at that piano for the first time and was rolling out bagatelles by sundown. I don’t think it was quite like this. A more accurate version surely begins with a fact that has long confounded my parents, and me to a degree as well, and that is that my brother did not like living in America. Almost from the beginning he complained of missing his Baghdadi friends and pointedly lagged behind in school, although he was no less clever than his classmates and had spoken English as well as Arabic since he was three.

The filling in this fictional sandwich is an entirely new set of characters — hyphenated Americans and Brits and Muslims — in the nearly McCarthy-esque days during the gulf war as Saddam Hussein is overthrown. The voice is completely different, the story line geo-political, and only a subtle hint in Part one (which I nearly missed) suggests the young woman’s interest in this culture.

The most profound asymmetry is in the relationships, between cultures, religions and educational status and, in some ways, also reflects the assimilation of the Jewish writer into the mainstream, in contrast to the perpetual turmoil in the middle east.

Or not. This novel is as much about interpretation and the perception we bring to the reading. The middle part may be jarring, and seems so far from the story line it’s hard to make sense of it, at first, but take your time with it. I prefer only to review books I recommend, and this one gave me pause, but if you’re interested in post-modern literature with superlative characterization and excellent writing, despite its asymmetrical nature, there is a path worth following for the excellence of the reading. Much to think about here for thinking readers.

Available in hardcover or for your favorite e-reader.