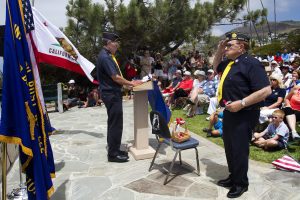 VFW Displays Respect to Those in Uniform
Laguna Beach American Legion and Veterans of Foreign Wars will conduct its 89th Memorial Day ceremony in remembrance of military service personnel on Monday, May 30. Constitutional historian and Post 222 member Howard Hills is the keynote speaker at the service, which begins at 11 a.m. The public is invited to come early as seating is limited.

Floral arrangements should be dropped by 10:30 a.m.

Veterans Treated to Free Breakfast
Enjoy an ocean view and entertainment at the annual Memorial Day pancake breakfast from 7 a.m. to 10:30 a.m. Monday, May 30, in Heisler Park.

Police and firefighters prepare the $5 breakfast at the corner of Myrtle and Cliff Drives. The fundraising endeavor by the Exchange Club supports child abuse prevention and youth projects.