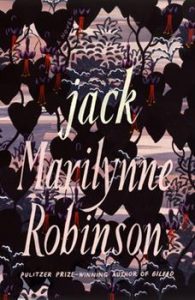 Jack is best read in a quiet space. Slowly. Pensively. Because it is a quiet novel, told almost in a whisper.

An interior narrative by one John (Jack) Boughton, ne’er-do-well son of a Presbyterian minister and the dearest self-destructive dreamer you will ever meet.

Jack takes place in the fifties in St. Louis, Chicago and Memphis. Jack and Della meet at a cemetery. In fact, the first third of the novel is that one night. They share a passion for poetry. They come from spiritual homes. They believe in possibilities. Their truths hide in the dark. Only in the morning light are they revealed. They leave apart because even a down and out white man cannot be seen with a Negro woman, no matter her intelligence and education, her place as a teacher, her solid citizenship. She lives on the black side of town. She sits at the back of the bus.

The perspective here, however, is not what damage she might do to his life, rather what he will do to hers. A damage so dispiriting, her family repeatedly attempts to prevent their liaison. As do all the people in their orbit, but none as adept at self-sabotage as Jack.

“It’s so dark,” he said. “The night is so long. We’d step across a threshold of some kind. Utter darkness and endless time. That would be the way of things. No more so.”

“Sometimes I feel like we’ve just been living on hints. Seeing the world through a keyhole. That’s how it would seem to us when we looked back.”

Jack is a singular story extrapolated to a larger story, and you won’t ever want it to end. Robinson can turn a phrase and describe a scene, and a feeling, like no one else. Spiritual and thought-provoking, she may be the most profound writer/thinker/philosopher of this age.

In fact, if you are looking for sacred (not religious) solace and/or inspiration, I suggest you read Robinson’s work a few pages at a time, or a passage at a time, like the Bible. She is that masterful and far-reaching in her depiction of the human condition. She is, by the way, the 2016 recipient of the Library of Congress Prize for American Fiction, among other many awards.

Start with the Pulitzer-prize winning GILEAD, the first in what is not really a series but four connected novels that take place largely in the heartland (Gilead being an imagined small town in Iowa.) GILEAD introduced us to the Ames family, HOME continued the family saga, and LILA, again. All award-winning. In Jack, we meet the son of Reverend Ames’ close friend, Reverend Boughton. The family is referenced occasionally, but you can read Jack without having read the others first, although I recommend you start at the beginning if only for the pleasure of the reading experience.