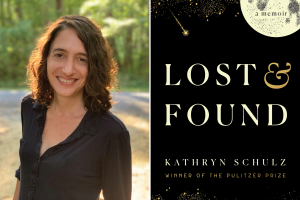 I don’t often review memoir – too many written and too much navel-gazing for me. It’s a genre that exploded into publishing late in the 20s, waned because of excess, but personal narrative has had a resurgence, based perhaps on the inclination in our culture to reveal the deepest part of ourselves. Like social media posts, blogs and vlogs, people want to be known and little is left to the imagination.

Some are particularly good reading. The Year of Magical Thinking by Joan Didion, one of the best, and more recently, Educated by Tara Westover, just out in paperback if you missed it.

Now, Lost & Found arrives with a unique blend of heart and mind. Written by Kathryn Schultz, a Pulitzer prize-winning journalist, it’s a simple story layered with meaning. I confess I might not have read it had I not heard her interviewed on the New Yorker Radio Hour podcast (she is a staff writer at the magazine) and I’m so glad I was inspired by her intelligence to read. With great insight, and written in terrific prose, Schultz focuses on a discrete period when she nearly simultaneously lost her father and discovered the love of her life. Life events bookended with an ampersand.

Finding is usually rewarding and sometimes exhilarating: a reunion with something old or an encounter with something new, a happy meeting between ourselves and some previously missing or mysterious bit of the cosmos.

The book is broken into three parts: lost, found, and, and, a structure that emphasizes the links. Loss is heart-wrenching and will be familiar to many readers – the memories revisited and bonds reclaimed when a loved one dies. Found is equally touching, and uplifting, true love the essence of being alive. And, for me, was the best part, because this is a treatise on connection, from birth to death and beyond.

Languages, like landmasses, change shape over time. Until the late nineteenth century, the final character of the English alphabet was not the letter Z but a word: “and.” …The twenty-seventh of those symbols dates back to ancient Rome, when scribes, resorting to  cursive to write more rapidly, linked the two letters in “et, the Latin word for “and.”

Put those letters together in script and you will see the birth of the ampersand.

In the pages of this lovely memoir, Schultz manages to rhapsodize about not only language but her father’s escape from Nazi Germany, a near-miss meteor strike, the meaning of consciousness and freedom and spirituality, and more. If you enjoy smart musings and appreciate the and in all things, you will be mesmerized by Lost & Found.