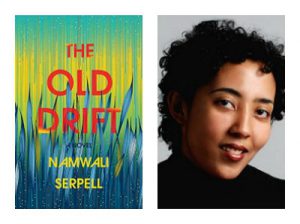 The Old Drift by Namwali Serpell

If you are a fan of the Russian epic, magical realism, or historical and/or geopolitical fiction, these two new novels incorporate the best of those forms. Great storytelling with a solid dose of magical realism or cultural realism and a rich line-up of characters.

The Old Drift, which is Russian in scope, tells the tale of three families from Europe, Africa and India, over three periods of time, whose lives and interactions define the formation of a nation. Serpell sporadically adds a most unusual Greek-style chorus [think mosquitoes] to remind the reader that the land has existed forever, and will continue to exist, despite colonists and xenophobia, diseases, and personal and political disaster. The Old Drift is filled with Homerian journeys and heroes and a large cast of characters that will be daunting, at first, but Serpell does an excellent job grouping their stories to make it easier to follow. She begins way back, in the depth of a jungle, with Livingstone, and carries us all the way to a future ruled by drones and electronic surveillance. To be sure we recognize the epic nature of the novel, she drops in nods to Shakespeare, Milton, and Virgil, and a finale reminiscent of Conrad’s Heart of Darkness. The ride is fast-paced, filled with what I’m sure most of us never knew about this country, and a style of writing deceptively simple, although she goes in and out and back and forth, and because she is a masterful writer, we follow until we wonder, where does it all go and how did it get to this point? “This is the story of a nation – not a kingdom or people – so it begins, of course, with a white man…” That introductory colonist tells us, “The worst difficulty of exploration, I learned, is that it is a tormenting isolation. There was no chumming it up with blacks, naturally.”

Although The Old Drift is fast-paced (despite the length) read it slowly, savor it, tell your friends. Available in hardcover or for your favorite e-reader. 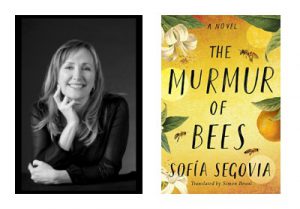 A Murmur of Bees by Sofia Segovia, Translated by Simon Bruni

The Mexican writer Sofia Segovia’s sweet novel, A Murmer of Bees her first to be translated into English, was issued recently by Amazon for Kindle as a special event tied to International Book Day, and there is also a hard copy available. The novel is, at heart, a fairy tale – a direct descendent of Colombia’s Gabriel Garcia Marquez. A baby, smothered in humming protective bees, is taken in by the town wet nurse, a modern day good witch. Named Simonopio [yes, think Pinocchio] his otherworldliness and unusual powers, despite an inability to speak, form the backbone of the novel’s story, from prerevolutionary Mexico during the great flu epidemic of the early 1900s to the cultural and economic struggles of generations. Like Tolstoy, or Marquez, also Isabel Allende, we encounter wealthy landowners surrounded and influenced, often protected, by servants, laborers, priests and magicians. A large cast of characters with a large imprint, but an intimate tone of voice. Along the way, we experience the upheaval and magic of Mexican history – family connections, tragedy, redemption, spirituality and superstition, and the healing bond of love. The narration is lyrical and rich, and you might shed a few tears, all in service to good storytelling. As the boy reminds us, “we listen to what life sometimes murmurs into your ear, heart or gut.” Or as his friend says, familiar music transports him “to warm days swimming in the river, to the toads that croaked at nightfall, to the summertime cicadas, to the orange-tree mazes, to the footstep of a bee on my face, and to its sound when it flew off.”

Transporting indeed and a lovely read.