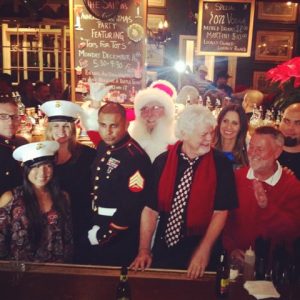 Supporters pack the Saloon’s party that sends gifts to Toys for Tots.

The Saloon in The Peppertree Lane in downtown Laguna Beach will host its 14th annual Christmas party benefiting Toys for Tots on Monday, December 18, from 5:30 p.m. to 9:30 p.m.

Admission will be one unwrapped new toy and will be exchanged for a ticket to an opportunity drawing. The drawing will have an array of wonderful prizes which will be given away all night including gifts from Peppertree Lane neighbors La Rue du Chocolat, and Sutton Place. Previous prizes have been: gift certificates from The Montage Beverly Hills and other local restaurants such as, GG’s Café, Dizz’s As Is, Mozambique, The Lumberyard, 230, Alessa’s, Salerno’s, Tommy Bahama’s, Broadway, 370 Common, Reunion Kitchen and others. Also to be given away are multiple prizes from Anheuser Busch and various liquor and wine companies. Additional raffle tickets will be available for purchase. The evening will also feature Hors D’oeuvres, drink specials and an appearance by Santa Claus himself.

The most needed gifts this year are for young people, especially boys and girls between the ages of 12 and 17. The Saloon works with The United States Marine Corp. and their Toys for Tots program. Several Marines will be in attendance to pick up and transport the toys to their distribution center.

The Saloon is located in the Peppertree Lane at 446 South Coast Highway, Laguna Beach.