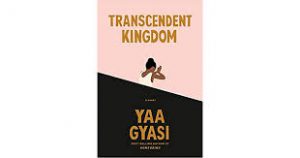 Yaa Gyasi’s debut novel, Homegoing, was a hard-hitting study of four generations of African women descending from a slave ship. It moved from place to place and story to story, the thread being hardship and mistreatment. Despite the intensity of these tales, Gyasi, born in  Ghana and raised in Alabama, wrote with a gentle hand, and received great acclaim.

Her second novel, Transcendent Kingdom, is equally graceful and more subtle, and totally different. Aiming her astute eye on one family, the daughter/sister/narrator, who takes the brunt of hardship and despair on her shoulders, makes her way as a neuroscientist here but finds herself also in Ghana, the family homeland, where she reflects on her destiny.

In undergrad, I used to poke fun a psychology — a soft science. It was about the brain and cognition, yes, but it was also about mood — feelings and emotions seemed useless to me if I couldn’t locate them in data, if I couldn’t see how the nervous system worked by taking it apart. I wanted to understand why the feelings and emotions came about, what part of the brain caused them, and, more important, what part of the brain could stop them.

The protagonist, called Gifty, spends much of her time, and energy, on laboratory research with mice and projects these to humans. She has an urgent need to understand the addictive nature that destroyed her brother and left her mother in a life-long state of depression. More than any of the other strands — science, spirituality most prominent — this is a novel about mental illness and its impact on nearest and dearest.

Although this novel too has received high praise, it is less transcendent as revealing. The sort of book you read and think about, without being blown away (Hamnet) or mesmerized [Fresh Water for Flowers]. A work of fiction that will touch you and stay with you and affect you perhaps more after the last page than during the reading.

I’ve always found that traffic on a bridge brings everyone closer to their own personal edge. Inside each car, a snapshot of a breaking point, deniers looking out toward the water and wondering ‘What if? Could there be another way out.’

The prose is direct and unadorned, although Gyasi occasionally ruminates on the ways in which humans connect, or not. She reminds us we are all the same, we occupy the same space, and in our own way deal with our demons. Although clearly race compounds personal and family difficulties, she also makes clear that no one escapes, even if only some are undone. Truth always best evident in fiction.