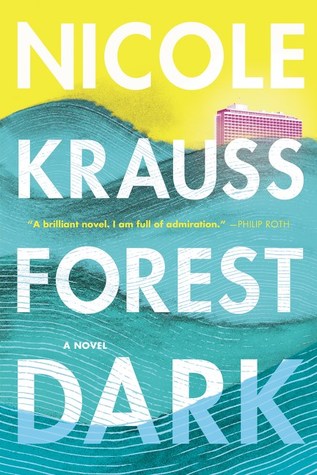 Reading Nicole Krauss reminds me of the “Sound of Music” lyric: how do you solve a problem like Maria? How do you explain a literary enigma like Nicole Krauss?

History of Love, her second novel, was sheer genius. Even her debut novel, Man Walks Into a Room, seemed more like a fifth novel, absorbing and compelling. Great House, which I confess I liked the least, but admired, another somewhat abstract, metaphorical treatment of the nature of self and also the writing life. Common themes.

Forest Dark is no exception. Equally brilliant writing, touching and metaphysical, she once again employs two primary characters, who seem to have nothing in common, to weave, or perhaps unravel, a mysterious web. She places this contemplative novel, frankly more contemplation than storytelling, in Israel, reflecting the turmoil there as well as in her own life.

But really, it’s the unstoppable force and momentum of life that we want to control, and with which we’re locked in a struggle of wills that we can never win.

In the seven years since her last novel, her marriage to the equally brilliant and enigmatic Jonathan Safran Foer ended. Krauss, like her fictional doppelganger, went to Israel, the place where history confronts spirituality. She centers the novel on this perpetual search for truths, and uses as her alternate ego an old man named Epstein, nearing the end of life and trying to separate the wheat from his chaff in order to slip gracefully into ash.

What story there is has most to do with the concept of time. Our lives a matter of choices, in the moment, and the historical context, and the people we encounter – not at all linear and maybe not a matter of destiny. That way of seeing time as a wrapper that folds around us.

Epstein is in the midst of divesting himself of his earthly, and very valuable, belongings, while at the same time, a man seems to have fallen off the balcony of the Tel Aviv Hilton, except there is no record of it. The writer-narrator feels compelled to investigate, in search of a story, so she leaves husband and children to head to the holy land, where she meets a third enigmatic characters who wants her to complete the unfinished works of Kafka, whom, he claims, never died when and where he was said to die, but lived covertly in Israel for many years.

To write is, in a sense, to seek to understand, and so it is always something that happens after the fact, is always a process of sifting through the past, and the results of this, if one is lucky, are permanent marks on a page.

Complex? Yes. Although in the hands of a fantastically skilled writer, mesmerizing. Who are these characters? Where are they in time and how do they connect? What is the truth?

The great Philip Roth commended the novel and some reviewers suggest the style is Rothian [their word]. He often uses a writer, most famously Zuckerman, another last name only character, to serve as narrator and facilitator, and some of the style certainly sparks comparison.

Narrative cannot sustain formlessness any more than light can sustain darkness – it is the antithesis of formlessness, and so it can never truly communicate it. Chaos is the one truth that narrative must always betray, for in the creation of its delicate structures that reveal many truths about life, the portion of truth that has to do with incoherence and disorder must be obscured.

Whatever the style, there is much to marvel in the writing, and anyone who has experienced the slow death of a marriage, or the pondering of the true meaning of time, or the significance of destiny, these readers will relate.

He had slept next to her for thirty-six years, and the mattress felt different without her weight, however slight, and without the rhythm of her breath the dark had no measure.

My only complaint is an overly lengthy and academic portion of the book where Krauss goes into great length about Kafka’s life and work. Overly so. For the most part, I was fully absorbed, having fully suspended disbelief, and in awe of the writing.

Recommended for fans of Solnit and Saunders, Roth and Bellow and Faulkner, Murakami and Munro, or those with a penchant for Einstein’s theory of relativity.

Available in hardcover at Laguna Beach Books and for your favorite e-reader.