OC Book Blog: “The End of Days” by Jenny Erpenbeck 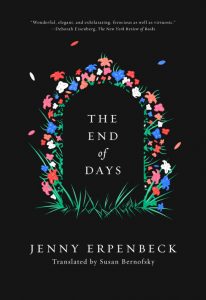 Too often the great works of other languages to do not come to the English-speaking reader. We miss out on a lot of great fiction and different voices. Fortunately, German writer Jenny Erpenbeck is available now in paperback, by acclaimed translator Susan Bernofsky, and The End of Days is worth reading for the most serious reader.

Make no mistake – this is not entertainment, nor is it a page-turner. It requires time, attention and thought, but it’s worth every moment.

The premise, like others that recently took on the what-if question of multiple lives, is one single person who dies five times – first as an infant, and then in each of the stages of life. This is not a spoiler, it’s the reason to read. A simple literary concept – what is the life we might have had?

Approximately 80 years ago, an arts and crafts teacher in Vienna declared the work of one of her pupils sloppy and shoddy. Is it possible that this pupil was given so long a life for the sole purpose of having the sentence uttered by that loathsome Viennese woman finally canceled out, buried by a new sentence uttered by a new teacher? Has she been in the world all these many years so these two sentences – to give just one example – can confront each other within her, and the good one defeat the bad? Might everything that’s ever been said and that will be said everywhere in the world constitute a living whole, growing sometimes in one direction, sometimes in another, always balancing out in the end?

Paul Auster did a particularly wonderful version of this in the novel 4-3-2-1”and Kate Atkinson explored similar theme in Life After Life. Both recommended and easier reading.

Erpenbeck opens the novel with an epigram from Sebald’s great novel, Austerlitz in which he also said, “At some point in the past, I thought, I must have made a mistake, and now I’m living the wrong life.” How many of us have had that thought once or twice?

In The End of Days, in prose that makes you stop and read again, and again, the female protagonist rides her five lives through five phases of European culture. From the early 20th century through wars and revolution and ultimately the dismantling of the Berlin wall. In these pages, politics is personal and the personal does not exist in isolation from the politics. This includes the battle for Jewish existence, Russian supremacy, German culture, etc. The characters are haunted by Goethe, by the extermination of Jews, Russian supremacy, poverty and corruption and also redemption. They find it difficult to express their feelings (extremely Germanic) and in their repression, they suffer almost as much as Russians in Tolstoy. A lot of ground covered in just 238 pages. And much to consider about what composes a life.

When her husband – who despite his serious illness had lived longer than many healthy men – finally died, the old woman accepted her daughter’s invitation, gave away all her chickens, packed up the Holy Scripture, the seven-armed candelabra, and her two sets of plates, and went to live with her. She left behind the semidarkness in which she’d been spending her life, along with a few pieces of furniture, their feet all scraped and scratched – her husband had taken a saw to them whenever they began to rot, shortening them by a centimeter or two – and left behind the dirt floor that was just the same outside, her granddaughter had scratched letters into it with a stick when she was little. Soon the thatch roof would weigh down the now abandoned house, pressing it into the ground, and covering it until it decomposed.

I nearly underlined the entire novel. Profound and poignant, it’s a word-by-word fictional feast. In paperback and for your favorite e-reader.