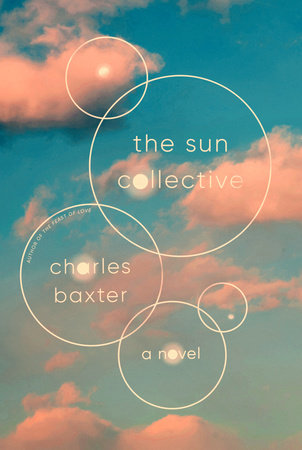 Like a spool of yarn, of many colors, The Sun Collective reveals in strands, a bit at a time, and takes the reader along, although I cannot give you a plot or even a meaningful summary: it’s just seekers of truths, meeting in strange ways, colliding, in effect, and then rolling along to an undefined destination, unravelling further as they go.

Charles Baxter has been writing quirky unforgettable characters for many years, more often in short stories than longer fiction, so this sixth novel, the first in a long time, is most welcome. I’m happy to report he is in fine form – an eccentric cast of characters trying to ground themselves in challenging times and in uncertain relationships. The novel asks the reader to observe closely, to read between the lines and peer into the shadows, in order to place ourselves right along side the action as the cast searches for truths, or at least, a sense of order.

Like a spool of yarn, of many colors, The Sun Collective reveals in strands, a bit at a time, and takes the reader along, although I cannot give you a plot or even a meaningful summary: it’s just seekers of truths, meeting in strange ways, colliding, in effect, and then rolling along to an undefined destination, unravelling further as they go.

With his backpack, shabby sweater, jeans, and running shoes, he fit right in. He began to talk to himself in a low, eloquent mutter. As his money dwindled and his credit cards maxed out, he considered his situation dispassionately, as if his life were being lived by someone else. He felt himself expanding into invisibility. Soon, he imagined, no one would be able to see him at all. He would just fade away and vanish before taking up occupancy in the spirit world where he would be as unwelcome as he was here.

An aging couple searching for their missing adult son, a former actor. A group of retirees who take their walks at the mall. An oddball young woman taking a weird hallucinogenic and her bully lover who may or may be a domestic terrorist. An activist group supposedly helping the poor and the needy, but under the auspices of a shadowy figure who may or may not exist. Another sort-of collective called Sandmen who target street dwellers. And, a Trump-like President and Cabinet perpetuating a philosophy reminiscent of Ayn Rand’s Objectivism, for whom “charity is a sin… because it encouraged losers.” Oh my.

It’s not magical realism, although sometimes it feels that way. It’s not science-fiction, although it could be. It takes place in Minneapolis, Baxter’s personal home and favored landscape, so the just-plain-folk setting is a stark contrast to the idiosyncratic cast and ever-so-gently fantastical underpinnings. It all works.

We were younger then. We believed everything. We thought love could save the world… But I don’t believe movies anymore. I don’t believe in them, and I don’t believe their stories. They don’t seem real to me – just fantasy. Robots in space? Superheroes? Characters who look like Cary Grant? The only person who ever looked like Cary Grant was Cary Grants. Fantasy. And novels. All of it. It all looks made up now. Bunch of imaginary puppets on strings, dancing around. When did we lost our grip on reality?

There is a subtle lampooning of our current political climate which provides some insight into the otherwise murky plot and underneath the surface of all is the deeply held beliefs, grief, anger, fear and hope. He’s a most unusual writer and this is a most unusual novel, so if you’re looking for the different, read The Sun Collective.