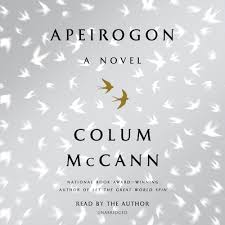 A fictional modern-day Scheherazade in Palestine.

Apeirogon, which means a shape of infinite sides, is based on the true story of a Palestinian and Israeli who forged an unusual friendship with a goal of peace in the region. Both men lost daughters to terrorism. Fodder enough for good fiction in a land where division and hostility prevail.

What makes the novel mesmerizing is not just the anomaly, but the telling. McCann has written 1001 snippets – as short as one line, as long as a couple of pages – and includes fascinating factoids as far afield as how birds and bats were once used as weapons (birds are a constant metaphor, reflecting, I suspect, on flight as freedom, and the cover is adorned with doves). Also how certain words, like mayday, came to be, how Israeli irrigation tunnels were dug by the same Sandhogs (Irish immigrants and freed slaves) who dug NYC subway tunnels, how Einstein and Freud commiserated over the rise of fascism or Francoise Mitterand’s favorite meal.

All embedded into the tapestry of two family tragedies and a shared determination to advocate for unity.

It’s a WOW work of fiction; to my mind, Pulitzer prize-worthy, but not for everyone. This novel requires a commitment to reading all 1001 passages, as each thread and every image has meaning, including several homespun photographs.

Apeirogon sounds more sobering than it is, although surely heart-wrenching in parts. McCann is a writer of unusual excellence. (If you haven’t read his National Book Award-winning Let the Great World Spin, I recommend highly, and its protagonist, the high-wire walker Phillipe Petit, makes an appearance here as well.)

The first 500 sections lead up to an intermezzo in which the stars of the story, Bassam Aramin and Rami Elhanan, speak directly. From there, 500 additional short passages wind down, plus one. A rare glimpse into the lives lived in this part of the world where ancient spiritual people have been repeatedly devastated by politics and greed. Also an inspiring view of two men who might have retaliated or allowed anger to define them, who chose peace instead.

And oh, the storytelling, the prose and the fascinating information, for example:

They seemed the most unlikely of friends, even beyond the obvious, one being Israeli, the other Palestinian. They had met first in the Everest Hotel. On a Thursday. It was that time of the evening when Beit Jala willed itself to cool down: the land breathed, the sun dipped, the birds rose, the hills took on a sudden burst of dark green.

Riot, from the Old French, rioter: to dispute, to quarrel, to engage in argument. Riote: noise, debate, disorder, rash action. Also, perhaps, from the Latin reguire, meaning to roar.

On the day of judgment, in Muslim tradition, it is said that a fine wire rope will be stung from the top of the Haram al-Sharif wall on the west to the summit of the Mount of Olives in the east where Christ and Muhammad will both sit in judgment. The righteous will be preserved by angels and they will cross quickly, but the wicked will fall headlong into the valley.

The reason a falcon is hooded is exactly the reason a falconer is not: the birds can see so well that they would most likely be distracted by other prey much further away. The falconer hoods the bird and waits. He wants the falcon to only see what he sees.

In Jewish tradition it is forbidden to throw away writings invoking the name of God. Prayer books. Scrolls. Encyclopedias. Garments. Tefillin straps. Even pamphlets or cartoon books. Instead of being destroyed, the texts are interred in a genizah, a burial place for the written word.

Released last month in hardcover, local bookstores like Laguna Beach Books will deliver online orders. The OC Library system is closed, but their many e-reading systems are active. And of course, that giant e-retailer we often rely on has the novel in digital format as well.

A wonderful and profound work of fiction in which to immerse yourself while social distancing. Stay safe and stay well. Happy reading.